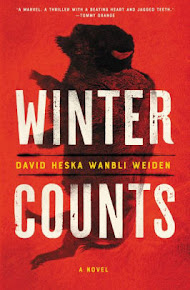 Winter Counts is David Heska Wanbli Weiden's powerful debut novel. Set on the Rosebud Indian Reservation in South Dakota, it introduces Virgil Wounded Horse who has lived through almost every Native stereotype believed by white people. He lives in a dirty house on a reservation. He was once an alcoholic who lost his girlfriend because he drank. His sister died in a car accident. He's now an enforcer on the reservation, a man others turn to when they want justice. He doesn't need anyone, especially all those people who look down on him. Even in school, the full-bloods picked on him because he was a half-blood, only half Lakota. But, Virgil is going to need help to raise his nephew and keep him out of trouble. He's going to need help from the community.

It's been three years since Virgil's sister was killed on her way to work when a driver swerved into her lane. Virgil stopped drinking because he's raising his nephew, Nathan, a fourteen-year-old who is now dealing with some of the same problems Virgil did in school. He's a teen picked on because he's a half-blood, not Indian enough. Other kids say Nathan's mother was drinking and that's why she was in a car accident. Nathan's learned how cruel other teens can be, and he makes one mistake. He overdoses on heroin, and lands in the hospital.

Now, Virgil's out for revenge, and it's personal. He teams up with his ex-girlfirend, Marie Short Bear. The two head to Denver looking for the men who are bringing drugs onto the reservation. Although Marie's father sent Virgil there, asking him to punish one man, Virgil is reluctant to go. What if Nathan needs him?

What if Nathan is arrested because pills are found in his locker at school? Suddenly, a fourteen-year-old is going to be tried as an adult for felonies, and, if guilty, he'll end up in federal prison. Virgil and Nathan have few choices except to cooperate with the police on a sting operation.

Actually, this is just a basic summary of the plot. There's so much meat to this book. It's an examination of the soul and spirit of a man. Who is Virgil Wounded Horse? Is he an enforcer, or is he something more to his nephew, to Marie, to the community? Can he become more than he's been in the past? Can he reclaim the positive aspects of his Native identity?

This is a powerful story of one man. But, it's also a revealing story of the life of the Lakota on the reservation, their struggles, their attempts to overcome the hands they were dealt. Weiden introduces Lakota stories and ceremonies. But, he's willing to incorporate the bad and the good. I had no idea there was a class system, with full-bloods looking down at those who are half-bloods. It's destructive in the book, and in society. Weiden uses Virgil and Nathan to show what can happen when boys are bullied in school, and in life.

David Heska Wanbli Weiden's Winter Counts is poetic and gritty, violent and beautiful at times. There is a violent confrontation, preceded by a Lakota ceremony and symbolism. It's a crime novel of contrast, all summarized in the warring spirit of one man, Virgil Wounded Horse. You really should read this one for yourself.

Sounds good. By coincidence, I am reading THE ONLY GOOD INDIANS by Stephen Graham Jones, a blend of horror and social commentary. Are four Indian men being stalked by some entity they offended ten years ago? The social commentary of the remarks by the main narrator are very sharp. It's good so far and I see why it got a lot of buzz.

A great deal of social commentary in this one as well. How much horror is there in that book? I don't usually read horror. Or let me know tomorrow when you've read more of it.

So far, there is nothing I would really call horror - he sees a dead elk in his living room that is not really there, but which makes him fall off a ladder. Looks like something he and his friends did 10 years ago - perhaps killed elk? - and it is coming back to haunt them.

I felt like it didn't live up to the hype. Maybe I was expecting something more like jack Reacher.

And, I liked it because Virgil changed, which Jack Reacher never did. But, I see what you mean, Glen.

Sounds good to me. I put it on my sidh list on Overdrive because the wait time is 6 months, so it might as well go on the wish list.

You're right, Gram. I don't think there's a hurry for this one.

Thanks, Lesa. I am going to look for WINTER COUNTS.