Hiding the Past by Nathan Dylan Goodwin 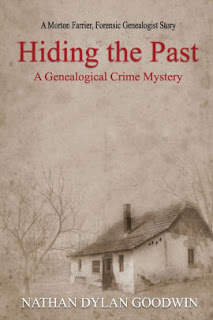 I have a fellow librarian to thank for the discovery of Nathan Dylan Goodwin's mystery series featuring forensic genealogist Morton Farrier. Hiding the Past will interest fans of genealogical mysteries and those interested in cold cases. The combination of a current case running side by the side with the past is what I enjoy about several series.

The book opens in 1944 with a woman and baby fleeing into an orchard. The reader already knows that isn't going to turn out well. In 2013, Morton Farrier's client Peter Coldrick hires him to look into his family history. In twelve years, Morton has never come across a case in which he can find no records at all of a man's birth. Of course, it happens. James Coldrick was born in 1944, and raised in St. George's Children's Home. It was wartime, so it's conceivable there was no record. Morton is momentarily stymied. But, Peter calls him that night saying he found a box. Before he can see him the next day, he's told his client committed suicide.

Morton doesn't believe it. For one thing, Coldrick paid him a great deal of money for this search, and he had just made a discovery he wanted to share. And, Coldrick's girlfriend has a solid reason to believe he didn't commit suicide. Now, despite the ruling of suicide, Morton is determined to find the answers to what he's calling the Coldrick Case. It's a case that will send him to churches, libraries, and archives hunting for records. But, someone powerful wants to hide the truth of James Coldrick's birth. Even when he's discouraged and feels like everything has gone wrong, Morton's former professor and mentor encourages him to keep digging, telling him it's exactly his kind of work, and he should be congratulated for sticking to a difficult case. "Morton hadn't thought about it like that before. He supposed that, despite the obvious drawbacks to stalking, mugging, explosions, espionage and a throbbing lump on the side of his head, it certainly livened up what could otherwise be a rather dull job."

Oh, Morton's life isn't dull. He's the opposite of what anyone would think of as a successful amateur sleuth, a man who gets drunk and vomits all over at his brother's going away party. There are secrets in Morton's own family. His father shocked him, revealing one after his mother's death from cancer, and now that there's another threat of mortality, there's a second revelation that tears Morton apart.

Goodwin introduces a flawed man who is determined to find answers, despite his own insecurities and issues. This is not a cozy mystery about a genealogist. It's a mystery of the explosive secrets with power to destroy careers and lives seventy years after the events that are hidden. Someone is still Hiding the Past.

I like the "current case running side by side with the past" too. One that comes immediately to mind is Kate Ellis's Wesley Peterson series. I am a fan of Val McDermid's Cold Case Squad series with Karen Pirie too. I see there are at least 8 in this series. It is going on my (endless) list. Thanks.

The other series I wanted to mention was Malcolm Shuman's about contract archaeologist Alan Graham, hired to do private digs, like about the Tunica Indians in Louisiana, the possible burial place of explorer Meriwether Lewis, the possible ghost of Lee Harvey Oswald, Jim Bowie, and finally Mayan gold in the Yucatan. I think you'd like these. The titles are:

You can find used paperbacks, or they are available on Kindle.

Jeff, I love Kate Ellis' Wesley Peterson series. I'm behind in reading them, but I bought most of them that I haven't read. I have to start from the beginning with Val McDermid's series. And, then you add another one? I think you're right. That series sounds good, too.

You got me..I put it on my library list.

Not at all a hero you'll expect, Gram.