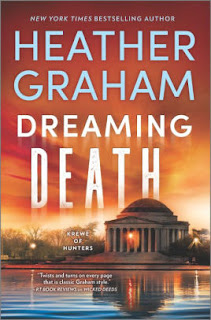 So, what do you turn to when nothing really suits your reading taste? Of course, I turned to the FBI, serial killers, and the paranormal. Heather Graham's latest Krewe of Hunters book, Dreaming Death, fits the bill.

Stacey Hanson had strange dreams from the time she was young when her private investigator father was involved in a high-profile investigation. She had the same dream over and over, as more details were revealed in each dream. Eventually, she "saw" her parents attacked by a man as she witnessed it. Although her parents didn't believe that the event would happen, the psychiatrist she saw believed enough to call in Adam Harrison. He trusted Stacey's dreams, and the FBI was able to trap the man hired to kill her father.

When she was eighteen, Stacey had another dream about a high school friend, a cemetery, and a drug deal. Although the local police wouldn't believe a teenager, Adam Harrison did, and the FBI prevented another death.

When Stacey graduated from the FBI Academy at Quantico at twenty-four, she immediately joined Harrison's Krewe of Hunters. Special Agent Keenan Wallace isn't happy when his boss teams him up with a rookie for a high profile case. Prostitutes are being killed and mutilated in D.C. By the time a third murder occurs, the media is calling the killer the Yankee Ripper. They don't yet know enough details to connect it properly to Jack the Ripper.

Stacey knows Keenan isn't happy to be working with her, but she was assigned to the case because she dreamt the location of the most recent victim before the body was found. For some reason, she seems to have a special connection to this case, and eventually, she's dreaming about a violent ending to the killer's spree.

In the meantime, Keenan begins to trust Stacey's dreams, and the two become close as they have each other's backs in a case that touches on the political as well as the scandalous deeds of the high-profile owner of an escort service.

It's always a treat to return to Heather Graham's Krewe of Hunters series, despite the serious nature of the murders. She always introduces historical elements along with ghosts who are willing assistants for the Special Agents with unusual gifts. The interesting settings and romance plays a large part in the attraction of these books. But, it's hard to ignore the combination, the pull of the paranormal and history, which seem to fit together so well. Dreaming Death is another intriguing book in this fascinating series.

I had the same problem last night when I finished my latest book. I started the new Jodi Picoult and knew immediately that I couldn't finish it. Although my husband was into ancient Egypt, this book read like a history book for me rather than Picoult's usual style. I looked at the Amazon reviews, and it appears I'm not the only one. I started another book and had a sneaking suspicion I had already read it--I checked and I had! Another book didn't look interesting to me anymore. I've finally settled on what looks to be a feel-good book, so I'm crossing my fingers. In the meantime, I have a book or two waiting at the library and I downloaded two ebooks from my old library that I've been wanting to read. On the plus side, I did enjoy the last two days at the virtual Bouchercon, and while I was watching I made a good start on my Christmas cross-stitch.

I don't know, Margie. This weekend just feels unsettled for some reason. I'm glad you enjoyed the virtual Bouchercon. Right now, an hour at a time is about all I can handle, just the length of some of my musical virtual events. I spent an hour last evening watching a concert with Irish and inspiration music. I have another hour tonight from Ireland.

I feel so sorry for performers this year. My college roommate is one. Their entire income has been wiped out by COVID, as well as the joy in their lives. I've lost some of my joy, but mine doesn't come from performing in front of a live audience. I feel so bad for them.

I enjoyed Dreaming Death...but then I have enjoyed all the Krewe books and look forward to the next one.

Right there with you, Gram, as you know.