Winners and an L.A. Giveaway

Congratulations to the winners of the last contest. Julia H. from Excelsior, MN won the copy of Turn to Stone, and Sharon B. from Albuquerque, NM will receive Auntie Poldi and the Handsome Antonio. The books are going out in the mail on Saturday. 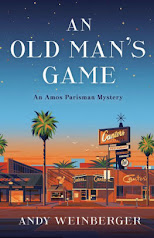 Andy Weinberger's An Old Man's Game features Amos Parisman. When a controversial celebrity rabbi drops dead over his matzoh ball soup at Canter's Deli in Los Angeles, retired private eye Amos Parisman, a sixtysomething, no-nonsense detective, is hired by the temple's board to make sure everything is kosher. As he looks into what seems to be a simple, tragic accident, the ante is raised after others start to die or disappear. Amos uncovers a world of treachery and hurt that shakes a large L.A. Jewish community to its core. 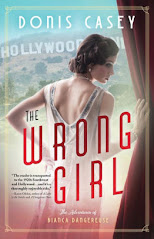 Or maybe you want a glamorous heroine. Donis Casey follows up her Alafair Tucker mysteries with The Wrong Girl. Blanche Tucker longs to escape her dull life in tiny Boynton, Oklahoma. When Graham Peyton roars into town, posing as a film producer, it isn't long before the ambitious but naive teenager runs away with him for a glamorous new life. Instead, Graham uses her as cruelly as a silent picture villain. Yet by luck and pluck, Blanche takes charge of her life and makes it to Hollywood. Six years later, Blanche is Bianca LaBelle, the reclusive star of a series of adventure films. Then, Peyton's remains are discovered on a Santa Monica beach. Is there a connection?

Which mystery would you like to win? You can enter to win both, but I need separate entries. Email me at Lesa.Holstine@gmail.com.  Your subject line should read either "Win An Old Man's Game" or "Win The Wrong Girl." Please include your name and mailing address. The contest will end October 1 at 5 PM CT. Entries from the U.S. only, please.

Thank you again! It arrived safe and sound.