You know how many virtual book and author events there are right now. I never would have discovered 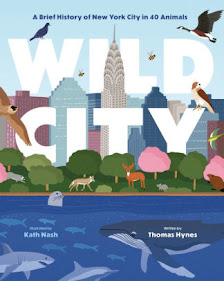 Thomas Hynes' Wild City if I hadn't watched an event put on by the library marketing team, Library Love Fest from HarperCollins. The book is subtitled "A Brief History of New York City in 40 Animals", and Kath Nash's illustrations beautifully complement the text. The book combines natural history and the history of New York City.

Before the Dutch arrived in New York, the land was teeming with wildlife. The land was a moneymaker for the Dutch, and then the British. In fact, beaver skins were currency. The pelts of otters, mink and muskrats led to fortunes. Later, fish and oysters were over-harvested in the name of profit. But, it was the growing population, with pollution and sewage that pushed out much of the wildlife. By the end of the 1960s, "New York City, once an ecological and natural gem the likes of which had never been seen before, was all but ruined."

It will never be the same, but Hynes spends a couple pages on various species that are making a comeback. And, in many of the stories of various species, he talks about the conservation group that is working to bring back that group. For instance, the pages about Canada geese mentions a group called GooseWatch NYC that advocates for compassionate and tolerant existence with urban wildlife despite the fact that one flock tried to kill Captain Sully. Hynes' humor comes through in statements such as that about the geese trying to kill the pilot.

Hymes writes about the reappearance of whales, deer on Staten Island, the return of beavers. There's a chapter called Legends. Alligators in the sewers stories fall there. There's a sickening account of the execution of an elephant, abused by her trainers. As a fan of the children's book, And, Tango Makes Three, I appreciated the story of the gay penguin couple, Roy and Silo, who fostered Tango at the Central Park Zoo. There are accounts of the working dogs, horses and sheep in the city. But, my favorite story is the one about the honeybees who led law enforcement to the largest marijuana-growing facility in the city. The bees were attracted by large vats of maraschino cherry juice, and they produced cherry-red honey. That led environmental inspectors to the facility.

As I said before, there are moments of humor in this educational, informative book. There are even short tidbits, such as the Collective Noun names for a group of animals. There's a bale of turtles, an embarrassment of pandas, a colony of beavers. My personal favorite? Anyone who has seen Groundhog Day will appreciate the fact that a group of them is called "A repetition of groundhogs."

If you care at all about the environment and animals, Wild City is an encouraging book. It's inspiring to see what can happen when people care enough to clean up rivers, the land, the city.

I searched the library and it is only found via the statewide library and they are not yet shipping to the rest of us. I will keep my eyes open though.

This book is exactly "my thing." I checked byt our library system does not have it. I put it in my Amazon basket and will check the county library system later.

Oh, darn, Gram & Caryn. It's such an enjoyable book.