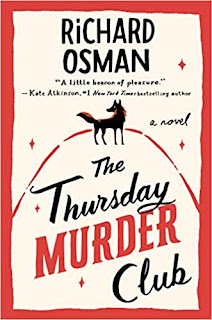 "Killing someone is easy. hiding the body, now, that's usually the hard part." It's even harder to keep that killing a secret when The Thursday Murder Club takes an interest. In his funny, sometimes poignant debut mystery, Richard Osman introduces a savvy quartet of septuagenarians who are intrigued by cold cases and murder.

Joyce, part-time narrator and retired nurse, is often overlooked. She's sees that as her skill, that she appears to be harmless and chatty. Elizabeth, the leader of The Thursday Murder Club, invites Joyce to join the small group who investigate cold case files left by Detective Inspector Penny Gray, the woman Joyce is replacing. Penny's now in The Willows, a place where the residents of Coopers Chase Retirement Village, a luxury retirement home, go to die. The other members of the group are Ibrahim, a psychiatrist, and Ron Ritchie, a famous trade union leader. Elizabeth? Is she a former spy, or something else? There are rumors about Elizabeth's past, and she's notorious for exaggerating those stories.

There are clubs for every interest at Coopers Chase, which was once a convent. The Thursday Murder Club is kept a secret, scheduled into the room once a week as a Japanese Opera study group. The visit of a young ambitious police constable, Donna DeFreitas, interests all of them. But, when the contractor who renovated Coopers Chase is murdered just after he was fired by Ian Ventham, the owner, the quartet turn into amateur sleuths. Elizabeth has a plan to put PC DeFreitas on the investigating team at the police station. It's left to Joyce and the men to tell the police how they witnessed an argument between Ventham and the dead man.

Ian Ventham can't leave well enough along, though. One day, his contractor is murdered. The next, he shows up with a new contractor, Bogdan, and equipment to dig up the caskets and bones in the convent cemetery. There are no protesters as wily as experienced seniors, though, and they block the path to the cemetery. By the time the police arrive, Ventham is furious. Although DCI Chris Hudson tries to calm him down, the man dies on the way to his Range Rover. By the estimation of the members of The Thursday Murder Club, there are seventy seniors who could have killed Ian Ventham.

Two murders, files of cold cases. The Thursday Murder Club is in its glory. But, Bogdan contacts Elizabeth, asks her to accompany him to the cemetery, and digs up, for the second time, a body on top of a coffin. Another mystery at Coopers Chase! It just gets better and better for the sleuths, but they're soon digging into the past secrets of drug dealers and retired residents of their community. While Hudson and DeFreitas would like to keep them on the sidelines, Elizabeth skillfully manipulates the two police officers to keep the group in the loop.

Elizabeth, Joyce, Ibrahim, and Ron. The four seniors have a lifetime of experience to buoy up their investigations. They're intelligent, manipulative sleuths. The character-driven mystery couldn't have a better cast of characters. It's a humorous, sometimes laugh aloud story with intelligence and wit. At the same time, it's bittersweet. The members of the group are all too aware of their own mortality, of the loss of memory of their loved ones, of the time when they themselves might suffer from dementia or illness. Death stares them in the face on a daily basis, so a murder investigation has nothing to scare them.

The four members of The Thursday Murder Club are in their seventies and eighties. Let's hope they live long lives to investigate more murders in England.

Vietnamese spam! That's a new one.

The book sounds fun. I put it on hold.

Hi Lesa - I was interested to read your review, as the book has been panned by some reviewers over here. Some bloggers of whom I have a high opinion have loathed it, but one that I follow regularly thought it was fantastic - it’s clearly a book that polarises opinions! I haven’t read it yet - now I might give it a try.

I am looking forward to this book. I will have it eventually from Poisoned Pen.

It is a fun book.

Interesting, Rosemary. I just don't see what there is to hate about this book. It treats the seniors with dignity, which goes far with me. I enjoyed it.

Caryn, Now, I'm interested to see what others think. I had no idea it would be controversial. Maybe more so in Britain where Osman is well-known.

It's not to be found in my library, yet. As a Senior citizen I love stories including us! I will keep my eyes peeled.

I'm not sure what happened to my comment, so here goes again. I'm glad you reviewed this book, Lesa. I have been eyeing it but hadn't heard any reviews other than those on Amazon. Fortunately, I was able to put it on hold at my local library because it sounds like something I would enjoy.

And, this one is respectful of seniors, Gram, and treats them well.

I really liked this one, Margie. This population isn't always treated with respect. They are in this book.