I'm actually in Ohio right now, so it's the perfect time to mention a book I just bought for myself, Kent 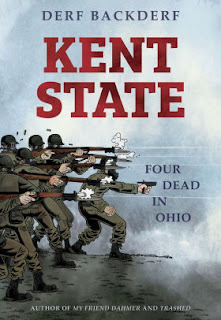 I went to Kent State, but it was five years after the shootings on May 4, 1970. Backderf has a note at the front of the book. "This book is a dramatic re-creation, but all of it is based on eyewitness accounts, detailed research, and investigation. The notes in the back of the book list the source material for every scene." Backderf tells the story of the four students killed at Kent, and the first four days of May 1970.

As a student at Kent, I took a class that covered the events, heard several accounts of the weekend by students who were shot, and I was there during the controversy surrounding the building of a gym on the site of the shootings. I lived in Prentice Hall for two years, a dorm that was right in the midst of the activities, and still had bullet holes in it in fall 1975. Even though I was not there in 1970, the story is a part of my university background. The book was released on September 4, so I have not had time to read it yet.

I don't usually read or enjoy graphic novels. There's something about the colors and text that don't mix well with my vision. But, this book, done in black and white is readable and accessible to aging eyes. I'm looking forward to exploring this book.

FTC Full Disclosure: I bought a copy of the book.

I was in college in New York at the time. A few days later, Jackie met me (we were engaged at the time) and we walked up with hundreds of others to Allison Krause's funeral. There was no excuse. This never should have happened.

You're right, Jeff. This never should have happened.

My university in PA closed for several days to allow us to deal with the shootings.
How sad that we have come back to a time where innocent people can be gunned down because they don't agree with the administration's policy line.

You're so right, Libby. It's sad that this book, scheduled for the anniversary, is actually timely. Very sad.