Have You Heard? - Some Like It Hawk by Donna Andrews

Here's Sandie Herron's review of the audiobook of Some Like It Hawk by Donna Andrews. 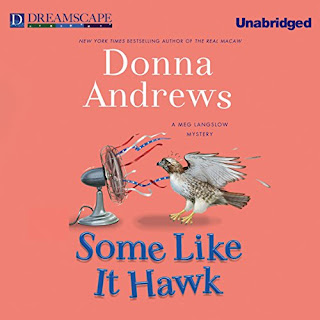 The rumors flying as we finished THE LAST MACAW are true.  The now ex-mayor of Caerphilly, Virginia did mortgage the town buildings.  Now, a year later, the bank who loaned the money, which has been absconded with by the ex-mayor, has taken possession of the buildings!  The library moved into Meg and Michael’s house where they eventually want their own library.  The police department moved into Meg’s father’s barn, which is a delight to him since he loves to “help” out.  All the town buildings stand empty except one.  Phineas Throckmorton, the county clerk, is squatting in the basement of the courthouse behind barricades and hasn’t moved since the takeover.  The lender cannot figure out how he is continuing to live there with no access to bring him food or supplies.  A private investigator is hanging about trying to find out what the secret is.  Worst of all a private security company has guards posted all over the town.
The bank who owns the town’s buildings has a few employees on site, only a couple of whom are liked by the town.  One of them approaches the barrier in the courthouse basement and is shot.  Looks like the guards got itchy fingers, but why, when they are working for the same “evil lender” as the victim?

The people of Caerphilly are pitching in to earn funds for the town by hosting Caerphilly Days.  Local craftspeople are giving demonstrations; the Baptist Choir and the Episcopal Choir are giving performances; and every civic, religious, or artistic group is helping.  Meg has moved her entire blacksmithing business to the town square in order to give demonstrations.  The twins seem happy to spend their days in the tent next door.

At times there is a cacophony of sound between trades people and loud music.  The fair’s planners  made it so the greatest noise occured at certain times ,,, to cover the horrendous squeak made by opening a trapdoor to a tunnel which leads to the courthouse basement.  This is how the clerk has survived.  Only certain townspeople know about this, and they work hard to keep it secret.

Meg and other town leaders are meeting daily and have begun wondering why the evil lender needs Throckmorton out of the courthouse now.  What is the urgency?  The only thing stored there are original documents.  Coincidentally Meg’s cousin, the lawyer handling the battle against the lender, has been looking for some particular documents as well.  What is so important?

Once they answer that question, everything makes sense.  The revelation is ingenious, both obvious and hidden in plain sight.  Author Donna Andrews has manipulated us yet again in this hilarious and offbeat mystery.  I cannot believe it is easy to take a murder, a mystery, and intrigue, toss them together, and produce the entertaining story that Ms. Andrews does so well.  While remaining just as chaotic and riotous as the previous entries in this series, I am seeing a slight shift in the writing toward more complexity that gives the book more depth.  I think it shows growth in characters and author.
Posted by Lesa at 3:00 AM

Somewhere along the way I missed this one..I got lucky and the library has it in large print! thanks!

You're welcome, Gram, from both Sandie and me.