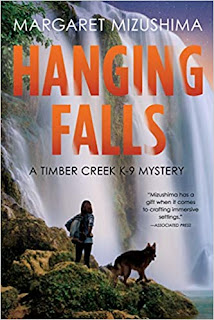 While I don't keep up with Margaret Mizushima's Timber Creek K-9 series as I should, it's easy to pick up the storyline. Hanging Falls, the sixth book, offers mysteries for the sheriff's department, but also provides additional answers in the ongoing story arc of Mattie Cobb's own family.

Deputy Mattie Cobb and her K-9 partner, Robo, are hiking with the local wildlife manager and her dog when they spot a body in the river. Recent storms and high water don't make it easy for the women to retrieve the corpse. There are no clues as to the young man's identity, but someone took a whip to him, and cut a word in the body.

Although Mattie is supposed to be driving to San Diego to meet a sister and grandmother she didn't know, she postpones her vacation to work on the murder investigation. But, Julia and their grandmother, Yolanda Mendoza, insist on coming to meet her. Because Mattie, her mother, and brother were kidnapped when Mattie was only two, she has no memory of her early life or family. She's nervous and emotional, and her work provides her with a change from her own worries.

She's also a little worried about her relationship with local vet Cole Walker. She and Cole have grown closer, but his teenage daughter, Angela, is giving both of them the cold shoulder. She's had a rough year with her parents' divorce, her mother's depression, and her sister's kidnapping. Cole and Mattie are both careful in dealing with the teen. However, Angela befriends a young woman at the vet's clinic when Hannah and her family bring in her dog. The family is part of a fundamentalist religious sect who has just moved to the Timber Creek area. Mattie is able to put two and two together based on clothing, that the body rescued from the river has some connection to the sect.

Although Mattie and Robo arrested a camper who they caught spying on them, the sheriff's department was unable to keep him in custody. When he's found dead, suspicions fall on several groups of people. One includes a farrier new to the the area. The other is the religious sect. While Mattie splits her time between her investigation and her family, who have past secrets to share, a new crisis arises that needs immediate assistance from Robo and Mattie, a missing child.

There's a great deal of tension in Hanging Falls, but much of it centers on Mattie's emotional reunion with her sister and grandmother. The crimes and investigation aren't as compelling as Mattie's ongoing search for answers. What happened to her father? Why were Mattie, her mother, and brother kidnapped? Where is her mother?

Readers who enjoy K-9 mysteries, and Mizushima's ongoing theme of family, will appreciate the latest in the Timber Creek K-9 series, Hanging Falls.

We are both up to date with this series, so will get to it as soon as the library gets a copy (though Jackie might wait until it is available on Kindle, as she prefers that format).

I’m waiting for this to come in at the library

I thought you were up-to-date with the series, Jeff. I hope you both enjoy it.