Yesterday, Rosemary mentioned I could even post pictures of breakfast. Ta-da! 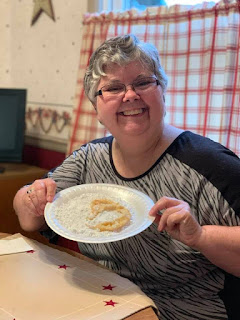 This was breakfast last Friday when I was home visiting my mother. My sisters were there, too, so Mom made Swedish rosettes. I understand there's a device for them that looks like a rose, hence Swedish rosettes. Mom makes them free-form, though. It's fried dough with powdered sugar on it. If you go to fairs or amusements parks, it tastes like funnel cakes, but better.

Other mornings, it was cocoa and toast, or apple crunch. Mom made that for me for dessert, and I ate the leftovers for breakfast the next couple days. It has to be heated in the microwave so the milk poured over the apples is all buttery. Mmmm.

But, the best food surprise was corn pudding. Other people talk about corn pudding made with Jiffy mix or crackers. My Mom and youngest sister, Christie, make it, though, as few others do. It's been over 25 years since we had it. It takes corn on the cob that's getting older, and it's run over this device at the risk of knuckles and fingernails. 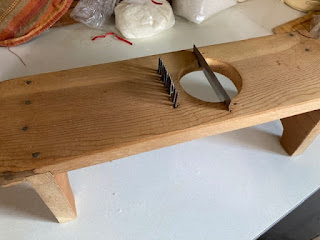 Then, the corn is put in an enamel pan with just butter, salt and pepper and baked. It's a family food memory, and it's wonderful. Christie surprised us and made it. We had it twice when we were there. This is Christie, glowing when she first served it because Linda and I were so surprised and ecstatic. 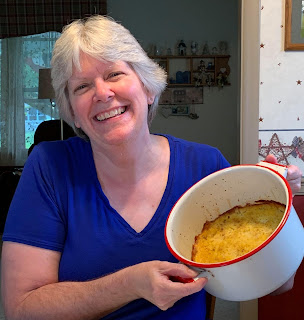 Rosemary was right to ask about food. Sometimes, that's what brings back the best memories.

Food memories, anyone?
Posted by Lesa at 3:00 AM

Wonderful Lesa! I had never heard of any of these things apart from toast - so now you have educated me! My good memories are many (& not all of them good - my grandmother’s cooking was horrible!) My mother loved baking, so we always had cake in the tin - usually fruit cake. She also made a lot of puddings - usually involving apples as we had a couple of apple trees. So: apple crumble, apple charlotte, stewed apple, baked apples... She passed the baking gene on to me, I bake at least once a week, & now my daughters do too. I have some lovely books but the one I use most is still the McDougall’s flour booklet!

Sorry that should’ve read ‘food memories’ - the perils of replying on my phone...

Oh, I know those perils, Rosemary. It's hard to make my fingers fit those phone keys.

You're welcome. Food, whether good or bad, often brings back memories. Sometimes, it's just the smell, isn't it?

Yes - the smell of the roast dinner in Sunday just about out the lid on what for me, as an only child, was by far the most tedious and boring day of the week! I doubt I’ve made a roast more than 3 or 4 times in my entire married life.

Rosemary, I was never a fan of Sundays, and I have two sisters. Sundays were tedious and boring, and then you had to go back to school the next day. To this day, I'm not fond of Sundays. They are good days for naps, and that's about it.

Food memories! Oh, yes! Donald and I have been known to gauge vacations on how well we ate.

That's interesting, Lesa; the first time I ever went to France was to stay with my penfriend, who lived in Le Mans. I was 14 and her entire family came to meet me in Paris; we stayed in a hotel overnight before heading south. In the morning we went up to see the Sacre Coeur and Montmartre. I had no idea that it was fashionable to write Montmartre off as a touristy travesty of what it had been in the 1930s-50s, so I just thought it was amazing. We ate breakfast on the verandah of a cafe, and I had never tasted a croissant so good, it just dripped butter. That entire summer was a true gastronomical experience for me - the family was not wealthy, but the Mum loved cooking and really pulled the stops out when she realised how much I appreciated her efforts. She also took to me the local market and I still remember the stalls laden with all different kinds of goat's cheese. We also went out to the little vineyard in the countryside where they bought their wine - it was run by one couple so was pretty basic, but this being rural France it was normal to sit around for hours chatting before you got to the point - I remember sitting in their garden, surrounded by fruit trees and vines.

I must have put on so much weight on that trip.

Food memories are the best. My grandmother used to throw stuff in a bowl and make the best apple pie. And she’d let us make shapes out of the extra crust and bake them for us to eat. Unfortunately she never had any recipe to write down since she did it all by eye.

Oh yes Sandy - I always got to make jam tarts from any leftover pastry (and I still do that with any leftovers myself - if my children are around they gobble them up.) I remember always being so impressed with the jam tarts that came in packets ('Mr Kipling'); I thought their perfect appearance must make them somehow better. I finally got to try one at the home of a friend whose mother didn't bake - and what a disappointment they were!

Oh, yes, Kaye! I have so many fond memories of that trip. Considering that we really didn't eat out that much, there was wonderful food.

Rosemary, You make me want to have a penfriend to host me in France. What delightful food memories!

I know, Sandy! My mother makes sugar pie with the leftover crust & she always says she never gets it quite right because she doesn't have a recipe. It doesn't matter! It always tastes right to her daughters!

We always took the leftover pie crust, rolled it out, slathered it with butter then cinnamon sugar and baked ..so good...makes me want to make some now!

Love the rosette Lesa. I’d heard of them but never had one. I must hunt down a recipe & try them out. And your sister is glowing in her photo. She looks very similar to my cousin Lois LOL.
My childhood memories include fresh “Pulla” baked by my mother. It’s similar to challa bread but baked in a braided shape with cardamom & nutmeg spices. So delicious when toasted & slathered with butter and/or jam.
Cheers!

I have so many food memories, it's hard to pick one. I think the cinnamon toast my mom used to fix under the oven broiler brings back the warmest feelings. That was a long time ago, and I still consider that my greatest comfort food.

Gram, That sounds just about like my Mom's sugar pie. Mmmm. Too bad you can't send a warm one my way.

On, Anne! "Pulla" sounds delicious! There's nothing like those childhood food memories.