A Case of Cat and Mouse by Sofie Kelly 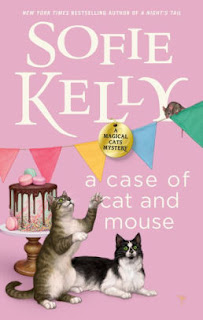 I like Sofie Kelly's Magical Cats mysteries featuring Hercules, the tuxedo cat who can walk through walls and Owen, the tabby who can make himself invisible. The connection to the feral cats at Wisteria Hill is intriguing. I like the voice of Kathleen Paulson, the librarian and amateur sleuth, owned by Hercules and Owen. In A Case of Cat and Mouse, though, there are two sentences that stand out for me. I wish I could give you the background without spoiling the dramatic conclusion. When Kathleen's boyfriend, Detective Marcus Gordon, questions her ability, she answers, "I'm a librarian. I know all sorts of things."

Kathleen knows how to do research which is why she's hired to provide background tidbits for the revival of a TV show, "The Great Northern Baking Showdown." It's being filmed in Mayville Heights, Minnesota because Elias, the executive producer, is from Minnesota. Several of the local residents won competitions to appear on the baking show. Kathleen provides background about Mayville Heights, Minnesota, baking, and even the competitors. When she finds one of the judges dead, she's also the perfect one to research the judge's life. Because she's been part of the show, members of the cast come to her with their alibis and lies when they won't go to Marcus.

No one on the show seemed to like the victim, Kathleen admits she wasn't a nice person, but she didn't deserve to be murdered. Everyone in town, including Marcus, expects Kathleen to poke around. Unlike other amateur sleuths, Kathleen keeps the police in the loop. She tells suspects and witnesses they need to talk to Marcus, and she even calls him to tell him he'll be hearing from some of them.

I enjoy this series because Kathleen does not sneak around behind Marcus' back. He's not stupid. He can't always tell her what's going on with the investigation, but he always seems to know what she uncovers. He's doing his investigating.

I  have a couple issues with this book, though. With so many people involved in the baking show, it was hard to remember what role some of them had. I felt it was a mistake to name one man Richard and another Russell. I still couldn't tell you which one was a judge on the show and which was a host. I also have a problem when a character has a tic. I can't tell you how many times Kathleen messes with the straps of her messenger bag. It seems to play a role in every scene.

There's quiet humor in this book, including an unsolved mystery that involves the library and a very clever prankster. I love the stories about the two squirrels at the library. There is a solution to the disappearance of small items owned by Marcus, gum, a key-chain knife, a lighter.

Despite my couple complaints, those who like cozy mysteries featuring cats and librarians, especially remarkable cats (and cat lovers think all cats are remarkable), will enjoy Sofie Kelly's A Case of Cat and Mouse.

I’m waiting for this one from the library

Should be ready soon! Mine was a library copy.

I'm ready to try this series and have put it on my list at the library. Thanks.