The Crow Trap by Ann Cleeves 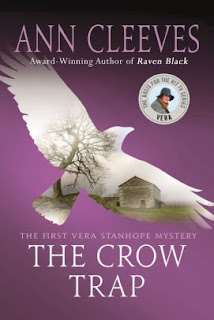 In preparation for the September 8 release of Ann Cleeves' new Vera Stanhope mystery, The Darkest Evening, I went back to the beginning of the series. While Vera was formally introduced in part 2 of The Crow Trap, she makes a typical Vera Stanhope appearance earlier in the book. Cleeves sets the stage beautifully in the first part of the novel, introducing characters, deaths, and the setting.

Rachael Lambert is counting birds for an environmental impact assessment. She'll be joined by Anne Preece, a botanist and Grace Fulwell who will count mammals as they determine whether a quarry will impact the wildlife and environment in a park in England. But, before Rachael's team even shows up, she finds the body of the neighbor, Bella Furness, hanging in the barn.

Rachael can't accept that her friend committed suicide, although Bella even left a note for Rachael. Despite Rachael's feelings, she knows she has a job to do, and a team to organize, although she doesn't really get along with either of the other women. Anne seems too strong and determined to go her own way. Grace's mind seems to be elsewhere, but her records indicate she's doing her job, finding a large number of otters in the area.

When a woman goes missing, and the police find her body, Detective Inspector Vera Stanhope shows up to take over the case. She brushes aside Rachael's suggestion that Bella's suicide may be connected to the murder. But, as the police ask questions, and Vera listens to everyone's talk, it becomes clear that the quarry and the environmental impact assessment might be a link. And, the small group of people involved with the study, the quarry, and the local land sold for the project may hold the key to the answer.

If you haven't met Vera Stanhope, she's not what you would expect of a Detective Inspector. She's a force of nature, a shrewd, overblown woman who demands a lot of her team, especially her young sergeant Joe Ashworth. She drinks too much, sleeps too little, lives in her father's old crowded place near a railroad. But, she's quiet when she sneaks up to listen, and she does do that to overhear conversations. Vera gets so much information when people don't know she's listening.

There's so much to discuss in this meaty book, from the title to the people to Vera Stanhope and her own intriguing background. But, the details are all essential in this mystery. Ann Cleeves doesn't include unnecessary pieces in her puzzle. Every piece comes together perfectly, in a book with a surprising solution. But, the clues are there. A reader cleverer than I am might figure it out. But, I never saw the solution. I'm no match for Cleeves' writing or her detective.

I just "discovered" this series a year or two ago and I'm still catching up. Every book I pick up is enjoyable. I love the writing, the characters, and the plots. Ann Cleeves is an amazing author. Thanks for the great review for one of my favorites!

A friend has been binge reading all of Ann Cleeves's books and series. He said (despite the hat and coat) that Brenda Blethyn is considerably more attractive than the character in the books.

I've read most of the Shetland books, Jane, but I really prefer the Vera series. You're welcome!

He is SO right. Brenda Blethyn is much more attractive than the character in the book. But, I love the character. If I didn't have LJ deadlines, I'd read the entire Vera series before the new one comes out. Fortunately, you really don't have to with this series.

I love this series and it's one that I'm caught up on - though I am tempted to reread the whole thing. I've been feeling like that about many 'fav' series lately. I think I'm craving 'comfort' reads and rereading a favorite series seems like comfort, even if it is about murder and crime. Ha! Does that make sense?

This was a good book and I liked it very much. Vera is a curious character, but certainly a good detective. Oh, and Brenda Blethyn? Yes, so attractive. I got to see her at the Malice conference in 2018 and she was really fun to listen to, along with Ann Cleeves. Mystery conferences - one day, right?

Oh, yes. I hope we get back to mystery conferences, Kay.

It does make sense. I have piles and piles of books at home. I picked Ann Cleeves' book. I hadn't read it, but the whole setup, mystery, police procedural, Vera, was a comfort read. I agree.

I too am rereading favorites as comfort reads with a new book being tried here and there. Maybe I will try this one and find a new series to read. Thanks.

I'm sure you can get this at your library, Gram. It's an older title, so no waiting!