Shadows in Time by Julie McElwain 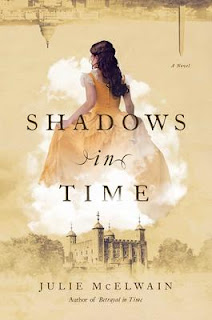 Once again, I read the fifth in a series, and wish I had started from the beginning. So, instead of starting with Shadows in Time by Julie McElwain, I'm suggesting you start from the beginning of the series with A Murder in Time. An FBI agent, time travel, Regency England, and, now, an FBI agent with only the tools available in the 19th century. Fascinating concept.

Kendra Donovan was an FBI agent until she somehow ended up in the Duke of Aldridge's castle in 1815. The Duke claimed Kendra as his ward, and, together, the two of them, along with several others, have solved crimes, while frustrating Kendra that she lacks DNA and other tools that were available to her in the twenty-first century. But, Kendra has proven to have the intelligence and skills to survive.

She's also made a slight name for herself as she discovers when Mrs. Horatia Gavenston asks her to look for a missing person. Mrs. Gavenston owns and operates a brewery, passed down from mother to daughter, and her business manager, Jeremy Pascoe, is missing. Kendra knows Mrs. Gavenston is keeping something from her, so when Jeremy's body is discovered, the woman can't be eliminated as a suspect. Kendra sends for Sam Kelly, a Bow Street Runner, to assist her in finding a killer.

But, Kendra has another case that requires Kelly's help. As close as she has become to the Duke of Aldridge, she's suspicious when a woman shows up, claiming to be his missing daughter, Charlotte. Charlotte was lost at sea twenty years earlier, when she was just six, and her body was never found. This woman resembles the Duke's lost wife, and has a few traits that may be remembered, or learned. Kendra has sketches drawn to send with Sam Kelly's men as they search for the truth behind the claimant.

Anyone who enjoys novels set in Regency England will appreciate this atmospheric mystery. It is a character-rich story that shows the changes in Kendra since she's arrived back two hundred years before her birth. Kendra and her circle of friends will bring many of us back to this intriguing series of books. And, it's fascinating to watch a sleuth with all the knowledge of 21st century tools as she copes with only the tools available to her in 1816. It's her own intelligence, wit and physical skills, along with her friends, that will help her survive in Shadows in Time.

I put A Murder in Time on hold. My library consortium has all of the books in large print!
Thanks for the good review.

Gram, My sister said the first one is violent, but they get better.

Thanks for warning me Lesa.I don't really like violence.

You're welcome, Gram. Because I only picked up the series with this one, I didn't know about the violence until my sister told me.