Because I'm only halfway through my latest book, Sandie Herron stepped up with a review of Charles Todd's Ian Rutledge book, Watchers of Time. Thank you, Sandie. 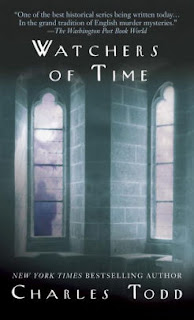 The writing and authentic tone in this tale of England in 1919 transported me to another time, another place, another world, and another era.  The descriptions were so vivid that I felt as though I had personally visited the marshes and the seacoast, the local hotel, the jail.  I even learned many personal secrets held closely veiled, some revealed at great cost to the bearer, but necessarily so to solve a murder.

Ian Rutledge is called from Scotland Yard to be certain the local inspector is doing an adequate job of investigating the murder of the local priest in Osterley.  He travels by motorcar with his constant companion Hamish MacLeod, the legacy of World War I.  Hamish is only alive in the mind of Ian Rutledge, haunting him and shadowing his every waking moment.  His presence is so omnipotent that even I found it exhausting at times, the reality of being shell shocked accurately portrayed.

Inspector Rutledge has a difficult job ahead of him. He must double check another policeman’s investigation from an outsider’s point of view.  As he visits assorted villagers to consider their perspectives, he must ferret out information most private in nature.  He must also try to determine what relevance the fact that a dying man called both priest and vicar to his deathbed might have.

Peopled by quite a number of villagers, we painstakingly get to know a bit about each one as Rutledge digs deeper for any number of possible reasons to want the priest dead.  He gives and takes and tries to pry information from very reticent individuals without revealing his own inner struggle.  What is the connection between Lord Sedgwick and the dying man Herbert Baker?  Does the priest’s housekeeper know where the item left in his codicil can be found?  Why is the monsignor afraid to stay at the rectory alone?  And why did word of the Titanic frighten visiting author May Trent?

Todd’s writing is very vivid.  It brought very complete pictures to mind of the scenes he portrayed, whether inside a vicarage or out on the marshes.  Even the language used was authentic to the time period; not just the dialogue itself but the entire novel.  More than once I found myself with the dictionary in hand looking up words used a century ago in common language.

The fifth in this series, this installment brought a different era to life, just as the previous entries have done.  A tad more explanation of just who Hamish MacLeod was in Ian Rutledge’s life would have done this entry a bit more justice, but hopefully readers will already know Hamish well from previous installments beginning with A TEST OF WILLS.

The “what ifs” and “what abouts” and the speculation that run through a police procedural kept this story moving in many directions.  This made the investigation seem more realistic to me, more in keeping with the ups and downs of real life.  In the end, I knew to expect the unexpected.  I wasn’t disappointed.