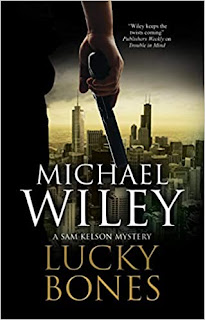 I wasn't sure what to make of Michael Wiley's second book featuring ex-cop turned PI, Sam Kelson. While the first book was gritty, the second in the series has many more comic elements, although it is still violent. I finally decided  Lucky Bones is for readers who appreciated the quirky cast and fast pace of Donald Westlake's novels. How about a PI who gets arrested for a striptease in a pizza joint? That's the hero of the story.

PI Sam Kelson suffers from disinhibition. The former Chicago cop was shot in the head in the line of duty, and now, when asked, he can’t lie or keep quiet. Even when he tells his new client, Genevieve Bower, that he doesn’t want her case, she still hires him to find her one hundred pairs of Jimmy Choo shoes that her boyfriend stole. Sam knows there’s more to the story than a collection of fake shoes and a missing DJ.

Sam needs a little help from unusual friends after he’s arrested, and turns to an accountant, Marty Le Couer and DeMarcus Rodman, a 6'8", 275 friend who dropped out of the police academy.  Sam finds his missing DJ, but he's now a murder victim. And, then, he's a missing body.

But, Marty’s interests are elsewhere. He gave a dirty job to his nephew Nate, who can hack anything. Nate is using a computer at a public library to transfer money illegally for G & G Private Equity, when there’s an explosion and seven people are critically injured or killed. Kelson’s small team doesn’t accept that Nate was behind the explosion, but, their investigation takes a different direction that the FBI's. And, the sister of a dead suspect disappears while Kelson is at her house to question her.

Even Sam's client disappears on him. When he finds evidence of the Jimmy Choos, he knows they were as fake as Genevieve's story. Every time he finds her, or she shows up in his locked office, she has a different story. When Kelson and Rodman learn Marty once dated Genevieve,  the threads to both cases link back to Marty. As Rodman says, “Hanging with him’s like climbing into a bag of spiders.”

Marty may be one common element in both cases, but the mysterious G & G Private Equity firm is the other. And, as much as they would like to scare Kelson and Marty into compliance, intimidation doesn't work with Sam's small team. And, in the long run, nothing is scarier than Rodman's girlfriend when faced with a confrontation.

Thanks, Lesa! Your words are always good words.