Have You Heard? - Miranda James' The Silence of the Library

I love Sandie Herron's comments about Miranda James' The Silence of the Library. I haven't had a chance to read James' latest book in the series, Cat Me If You Can. While we wait, here's Sandie's review. 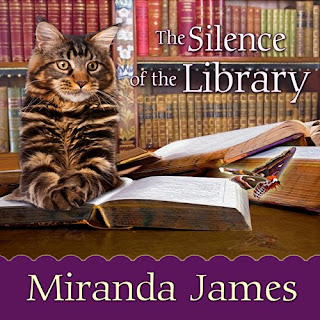 Charlie Harris loves books, so it’s no wonder that he is a librarian at Athena College in Mississippi and also works at the public library.  In this fifth entry in the utterly charming Cat in the Stacks mystery series, Charlie is preparing for National Library Week.  The Athena Public Library is planning an exhibit of the books of famous local author Electra Barnes Cartwright and other juvenile mystery writers.  Ms. Cartwright wrote the Veronica Thane series, a girl detective story.

Charlie has a soft spot for Mrs. Cartwright and owns many of her books, so is delighted to accompany the library director to visit the nearly one-hundred-year-old author and her daughter at her home when she agrees to appear at the library.  Charlie brings his Maine Coon cat Diesel with him on the visit, since Diesel goes almost everywhere with him, and Mrs. Cartwright is charmed by the gentle albeit large cat.

The news of her impending visit spreads quickly.  However, the entire event is almost cancelled when Mrs. Cartwright visits the library, at her daughter’s urging, to request an exorbitant fee for her appearance.  Some zealous series collectors and readers request book signings before her official appearance.  Some even offer huge sums of money to have entire collections autographed.  At least one publisher is vying for the right to several unpublished Veronica Thane manuscripts.

The fervor over Electra Barnes Cartwright goes too far when an avid fan is found dead in her home, the long-time editor of a newsletter on everything to do with “EBC”.  It is time for Charlie Harris to put on his detective hat and discover who was trying to silence the newsletter writer.  Many of her files have been taken, and it is unknown if any books have also been stolen, especially the rare variant of the first Veronica Thane book.  Charlie reads this entry in the series and shares the beginning chapters with the reader of this Miranda James book.  Charlie gains insight into the series character and applies those insights to the current situation, ultimately solving this mystery.

It was very creative of the author to combine some old-fashioned sleuthing, or looking for answers the hard way, with creative searching on the Internet.  Throw in some common sense and keen observations, and the reader is able to solve this mystery along with the main character.  The pace was leisurely yet steady, always moving forward, while allowing visits with some ongoing characters from the series.  Erin Bennett’s narration was straight forward, mirroring the steady pace of the novel with her voice.  A very enjoyable read.
Posted by Lesa at 3:00 AM