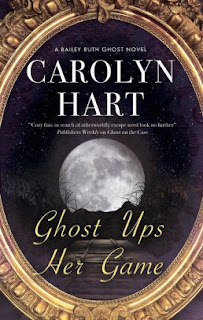 The Bailey Ruth books may seem to be charming traditional mysteries featuring a ghost who loves fashion, but, as readers know, Carolyn Hart's books have a little romance and a great deal of clever twists in them. Ghost Ups Her Game is the ninth in the series featuring the quirky heavenly emissary.

Once again, when Bailey Ruth Raeburn wants to return to her hometown of Adelaide, Oklahoma, she steamrolls right over her boss. Paul Wiggins might be the stationmaster who sends emissaries to assist people in trouble on earth, via the Rescue Express, but even he has a hard time with Bailey Ruth. When a message comes in that two people are in trouble in Adelaide, she grabs the ticket and jumps on the train.

She's just in time to find Robert Blair and Professor Iris Gallagher standing over a body. Iris orders Robert to get rid of a black sock filled with sand, used as a sap to kill Goddard College's vice-president of outreach, Matt Lambert. Bailey Ruth is shocked when the professor talks to her because people usually can't see her until she materializes. Bailey Ruth doesn't know which of the two she is there to help, so she just assumes they are both innocent. And, when Bailey Ruth saves Iris' daughter, Gage, when an arsonist sets fire to the victim's office, she's sure neither Iris nor Robert are involved. Iris wouldn't kill her daughter, and Robert is in love with Gage. And, Bailey Ruth is a sucker for a romance.

When Bailey Ruth's old friend, Police Chief Sam Cobb, refuses to accept that Iris is innocent, she believes she's on her own in her murder investigation. She knows someone had a reason to kill Lambert. If Gage is right, and the man was blackmailing someone, a well-to-do resident of Adelaide might be a killer. When everything seems to go wrong, Wiggins reminds Bailey Ruth that she could ask for help.

With her quirky delight in fashion and her love of Adelaide, Bailey Ruth Raeburn is a charming ghost with a serious devotion to justice and romance. Once again, readers can ride the Rescue Express to Adelaide, where killers are revealed by a ghost and the police, and romance is rewarded.