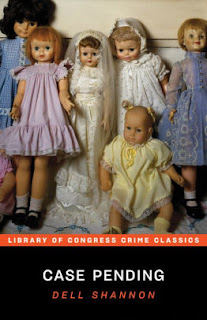 If you're interested in the history of crime fiction, you can't go wrong with the Library of Congress Crime Classics.The Library of Congress, together with Poisoned Pen Press, and editor/expert Leslie S. Klinger, is publishing books that reflect the history of the genre. Although I read many of Dell Shannon's books in the 1970s and early '80s, I don't know that I ever read Case Pending, the book that launched her police procedurals and the career of LAPD Homicide Lieutenant Luis Mendoza.

In Case Pending, Mendoza is called to the scene of a homicide when his sergeant, Arthur Hackett, suspects the murder of a young woman in the empty lot could be related to an earlier murder in another part of town. Although one woman still had her purse, and the other's purse was found in a separate location, the women weren't robbed. However, the violence done to the bodies, particularly the face, was similar. While these two cases are the ones that occupy Mendoza's time, his team is investigating several different cases.

Case Pending is a straightforward police procedural. However, it's the background and history of the book that is most interesting. Fortunately, that background is provided. According to Carla Hayden, Librarian of Congress, the book was first published in 1960. Elizabeth Linington, who wrote it under the pseudonym Dell Shannon, introduced Luis Mendoza, one of the first Latino detectives to appear in fiction. She goes on to describe him. "Independently wealthy and a snappy dresser, Mexican American homicide Lieutenant Luis Mendoza faces skepticism from his colleagues in the police force." Hayden reminds us that the book was a product of its time, a reflection of the culture that now has "outmoded language and stereotypes now considered offensive." It's important to recognize that this is a reflection of one location and time, while at the same time acknowledging that Linington was also a woman who had the courage to write more than thirty books featuring a Mexican American hero.

According to Leslie S. Klinger, Elizabeth Linington was the first woman to write police procedurals. She wrote four series under three names other than her own; Dell Shannon, Leslie Egan and Anne Blaisdell. The next books that followed Case Pending, The Ace of Spades and Extra Kill, were both nominated for Edgar Awards. Klinger says Case Pending is remarkable for several reasons. The author developed detailed portraits of the police in the story. Luis Mendoza's background as a poor bad who inherited money unexpectedly from a his grandmother is provided, along with his reputation as a gambler, an expert poker player, a sharp dresser who has a reputation with the ladies. Shannon also provides "a clear picture of the victims and their families". Third, she "was among the first to weave together multiple story lines into a tapestry of police activities."

If you read Case Pending in its appropriate historical context, provided by both Hayden and Klinger, it's easier to read the sometimes shocking stereotypes. But, those stereotypes are shocking because they were written, and accepted, sixty years ago. However, it's important to acknowledge the important contributions Elizabeth Linington/Dell Shannon brought to the genre. Library of Congress Crime Classics, with the cultural context provided by Hayden, along with the historical background, footnotes and biographical sketch written by Klinger, recognizes books that are important to the mystery field.

*****
FTC Full Disclosure - I received a copy from the publisher, in hopes I would review it.
Posted by Lesa at 3:00 AM

Nice review, I read quite a few of Dell Shannon’s books in the early nineties, I think this was one of them.

Thanks for highlighting Linington/Shannon, Lesa. I'm not sure whether it was in the Mendoza series or one of her others that I recall very traditional gender roles--the character whose wife had twins, and statements about how the mother had to stay home.....I'll look this one up.

I read Case Pending years ago. I ran out of books on a family vacation and my mom gave me a couple of the later books in the series to read. I went back to Case Pending and read the rest of the series. Even back in the 70s the stories were dated but I still enjoyed the mysteries.

Nann, You're right. It was the Mendoza series with the twins, etc. Like Sandy, I read quite a few of the books in the 70s. And, Sandy? You're right. They were already dated by I enjoyed the police procedurals & that the team was working on multiple cases at a time.

Overall, they were interesting books.

I read a bunch of them when they were coming out, I think they were part of the Doubleday Crime Club - did not keep a list of what I was reading them. They were very good. East read. I think I still have one in my bookcase.

Thanks Lesa for once again getting us to read even more books.

Never have read this or any of her books. Back under my rock.

I owned all of her mysteries at one point. Written under the names Lesley Egan, Dell Shannon, and Elizabeth Linington, she turned out a couple a year for awhile. Her plotting was exquisite. Her politics were wildly conservative. I tended to read over and around her more outrageous comments because the mysteries themselves are so very good.

I don't think I've read her books but I've certainly heard of Dell Shannon and Leslie Egan. Not sure of the third name, though. I definitely want to read CASE PENDING now.

I have all her police procedural books. I started collecting them way back then. I am not sure which ones I like best of the series but Coffin Corner is one of the funniest!

She was a member of the John Birch Society; definitely extremely conservative. Gwendoline Butler, creator of policeman John Coffin, predated her by four years. Her first Coffin book was published in 1956 and the fifth in 1960. In 1962, writing as Jennie Melville, she created policewoman Charmian Daniels ahead of Dorothy Uhnak and others who came slightly after her.

Thanks, everyone. I'm glad some of you are familiar with her under one name or another. "Miranda", I did not know that about Gwendoline Butler's Coffin series. I just read Shannon/Egan/Linington because I enjoy good police procedurals.

But, my all-time favorite police procedurals were ones I mentioned to Aubrey Hamilton the other day, Dorothy Simpson's Luke Thanet books.

Alandre said...
This comment has been removed by the author.
7:18 AM