The Lost Girls of Devon by Barbara O'Neal 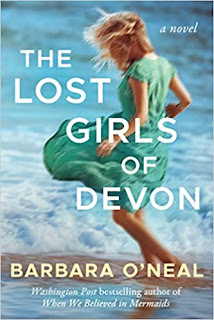 I've been reading and admiring Barbara O'Neal's novels since she wrote them under the name Barbara Samuel. I read her latest, The Lost Girls of Devon, under the guise of a mystery. Yes, there is a disappearance and several murders. But, this is actually a story that examines the relationship between four generations of the Fairchild women. It doesn't have the magical realism focus that some of O'Neal's earlier books do. But, there's a magic and strength in nature and love and family that is the emphasis of this story.

Lillian Fairchild may be close to ninety, but the mystery writer is still tuned in to the atmosphere and conversations in the Devon village of Axestowe. Something is going on in the village. She calls her granddaughter, Zoe, to tell her Diana, Lillian's home nurse, once Zoe's best friend, has been missing for two weeks. Zoe, who feels guilty for her year-long argument with Diana, packs up her teen daughter, Isabel, and returns to the one place that was always home, Lillian's Woodhurst Hall.

Zoe spent years living with her grandmother after her mother, Poppy, left her there, promising to return. A lonely, needy Zoe wrote to her mother weekly, begging her to return. But, it was only after Zoe moved to New Mexico as an adult, married, and had a daughter, that Poppy returned from her travels in the East. Now, Poppy might have a popular shop, The Kitchen Witch, but Zoe has never forgiven the mother who abandoned her. Instead, Zoe's trapped in her feelings of hate and abandonment, never able to trust that people she loves won't leave her.  And, she argued with Diana, feeling betrayed, when Diana befriended Poppy.

Zoe even feels as if her first love, Sage Cooper, picked Poppy over her. But, with Lillian's health fading, and Zoe's own daughter, Isabel, struggling with depression as a result of an unknown trauma, there's no choice but to allow Poppy to have a role in the Fairchild relationships. But, Zoe won't do that graciously, or with love.

While the community comes together to search for Diana, and, then the police look into the murder of a young woman left on the beach, that's a vehicle the author uses to bring this family, and Sage, back into the same circle. It's those relationships, and that circle that is the heart of the story.

Barbara O'Neal specializes in novels featuring broken women who are forced to gather their strength and regroup. They are realistic, believable characters who have been hurt, or, have hurt others. It's O'Neal's role to show women who grow stronger, who heal, who find strength in other women. The Lost Girls of Devon, on the surface, is the story of several women who have gone missing. It's actually a heartbreaking, and heartwarming, story of lost girls who need the support of other women.

This one sounds good, Lesa. I'll watch for it.

It is good, Kay. I really like Barbara O'Neal anyways, but this one was excellent.

The book sounds good and interesting. Just bought the e-book for $4.99 on Amazon. It will go into the TBR pile, which has had some success since all I do is stay home.

It is, Netteanne. I always like Barbara's characters. I hope you enjoy it!