My Wife Said You May Want to Marry Me by Jason B. Rosenthal 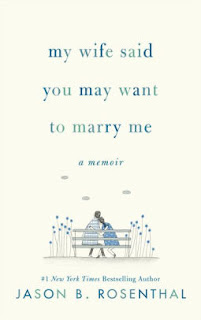 I may have mentioned this before. When my husband, Jim, died, my mother gave me the best advice I received. She said, "Your life will be different, but it can be just as good." Jason B. Rosenthal came to that realization as well, that life can go on. He writes about it in his memoir, My Wife Said You May Want to Marry Me. He lost his wife, Amy Krouse Rosenthal, to ovarian cancer after twenty-six years together. He says this book is "A story of how you come to the end of one part of your life and find a way to turn the page to the next."

Some may recognize Amy Krouse Rosenthal's name. She wrote several memoirs and a number of children's picture books. She was a film maker, and a creative copywriter. But, she's probably most famous for the essay that appeared in The New York Times' Modern Love column just ten days before her death in 2017, "You May Want to Marry My Husband." Rosenthal's book about his love for his wife, their family, and the terrible loss and grief is a response to that article. It was quite a while before he realized that Amy's column was a message to him, and a blank space for him to write the rest of his life.

The first third of the book is the story of their love, a gift that never changed through twenty-six years. They were just about to celebrate their life as empty nesters when Amy returned home from an appearance at the National Book Festival saying she was in pain. She was diagnosed with ovarian cancer, and for two years they tried everything. The second part of the book covers those years with supportive family and friends. But, it's no secret that her life ended with hospice and death.

Why did Rosenthal, a man deeply in love with his wife, write this book? In some ways, his wife challenged him. This is "An exploration of what it means to love, to lose, and to emerge from that loss somehow ready to be resilient." He makes no secret of the fact that he struggled. However, he had enormous support from their three children and his family. But, in the next couple years, he was hit time and again by loss. He started having panic attacks. It helped to see a therapist. His list of suggested reading is a minor poke at his wife's lists for everything. He had to learn to appreciate music and events and travel by himself.

Rosenthal's memoir isn't a how to deal with grief advice book. He says, "There's definitely no timetable for grief and all its complexities." No one goes through the same process. But, it's a beautiful memoir of two people who loved each other and surrounded themselves with love. "I needed to keep talking openly about love, loss, and filling one's empty space."

After Jim died, some books just spoke to me. There might have been a message here or there, an ah ha moment about pancreatic cancer in a novel, a passage that made me nod in recognition. Mom's advice was best. But, Jason B. Rosenthal's entire book is filled with moments of recognition. "There's enormous comfort and hope in learning how other widows and widowers got through the inevitable painful darkness, and that they got through it."

Every day is a struggle in so many ways. I don't think I can read this yet.

And, you shouldn't, Kevin.

What a lovely, touching review. My heart goes out to you.

Thank you, Sandie. It's a lovely book as well.