Murder in the Balcony by Margaret Dumas 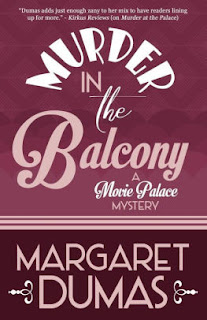 I don't know when I've described a mystery as joyful. Yes, Margaret Dumas' Movie Palace mysteries have murders in them. In fact, there are two, and a couple attempts in the second book in the series, Murder in the Balcony. But, Nora Paige's team is quirky and lovable. Trixie, the ghost of an usherette who died in 1937 is delightful. However, it's the love of classic films and the few reviews by "Sally Lee" on the blog "Movies My Friends Should Watch" that truly add a spark to these books.

Nora is the almost ex-wife of movie star Ted Bishop. She had been waffling about whether or not to take him back when it was all over the Internet that he was back with his co-star, the woman he had left Nora for. One decision made. So, she can go back to worrying about her job as manager of the Palace movie theater, and how to make the money to maintain and upgrade the theater. She might not need to. According to Lisa, the friend who owns the coffee shop across the street, realtor Stan McMillan is trying to buy up the businesses on the block to build a multi-use development. And, Lisa is feeling the pressure.

But, Nora and Lisa aren't the only ones with problems. Callie Geo, the film student who works for her, is dating a realtor who won't answer her phone calls. Callie can forgive him when it turns out he's dead. However, she's not so happy when she learns he was dating two other women at the same time. Did one of Warren's girlfriends kill him? Or, did Warren know something about Stan McMillan, who happened to be in the same bar the night Warren was murdered?

One pushy realtor. One dead realtor. Nora is hosting an all-day conference for realtors, hosted by Warren's boss, June. It's her chance to check out Stan and the other realtors, and see if anyone talks about buying up the block, or about murder. But, before she can even make plans to have her resident ghost help her, Nora and sexy former crime lord Hector Acosta put out a fire in Lisa's coffee shop. Nora's convinced Stan is responsible, so Trixie is assigned the job of spying on Stan. Nora can't imagine that a woman will be killed in front of a room full of people, a woman who goes over the balcony, just as Trixie did years earlier.

There's so much to like about these mysteries. While the mystery itself is a little confusing, the characters are wonderful. Nora's staff includes Callie, a high school student with a crush on Callie, a grumpy, opinionated projectionist, and a nonagenarian. Add in Trixie, the ghost. And, Hector is hot. But, I have to admire Nora, who expresses her love for strong women by showing movies featuring Bette Davis and Eleanor Powell. She's attracted to Hector. "But no amount of attraction made up for the fact that I wasn't ready. I wasn't ready to let another man into my life. Not after Ted's series of brutal betrayals. No, I wasn't ready to start thinking about a life with someone else. Not until I'd established a life just for me."

One part of Nora Paige's life, the secretive part, is the part she plays as blogger Sally Lee, writing a column about classic films. Those blogs are included in the book, reviews of "Roman Holiday", "Born Yesterday", and "Born to Dance". She talks about the women in the films, and does include a spoiler alert that she can't discuss the films without talking about what happens. I've added some classic films to my list of movies to watch after reading Dumas' books.

You might pick up Margaret Dumas' books for the mysteries. You'll return for the cast and the films. They're delightful. (The third book, Murder on the Silver Screen, has just been released. I can't wait!)

Margaret Dumas' website is www.margaretdumas.com, but she also has a site, www.moviesmyfriendshouldwatch.com