Marah Chase and the Fountain of Youth by Jay Stringer 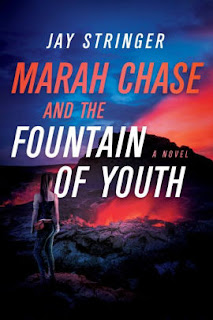 And, I mean, she swoops in. Treasure hunter August Nash was just about to recover the Ark of the Covenant when Marah steals it. But, she makes an enemy of the man who was once her mentor, and he doesn't really want her to live to regret it. Even so, her partner in crime steals the Ark from Chase, and she's forced to return home to New York City with just the memory, although other relic hunters do know she beat Nash at the game.

Once Chase is home, she's just about kidnapped by the owner of a cola empire. She wants Marah to search for the Fountain of Youth. Chase scoffs at the story, but heads to London in search of an elusive journalist who might have a story to tell. That's one mistake. She knows she's in trouble when she does some research at the British Library, and her friend, Hess, who comes to meet her, is accosted by Neo-Nazis. Then, she and Hess make a fatal mistake and lead others to the journalist who has been trying to keep a low profile, and remain under the radar.

Although Chase and Hess make some terrible errors in judgment, legends and maps lead them to Tanzania and Mt. Kilimanjaro. They head into danger under the threat of earthquakes and volcanic action, but it could mean their death if they don't defeat the team with entirely different goals for the Fountain of Youth, and the world.

Once again, Stringer brings back his gutsy protagonist, and teams her up with an equally brave partner in adventure. It's another fast-paced story. But, there's more depth in Marah Chase and the Fountain of Youth. Issues of cultural appropriation, faith, history, identity and environmental change, influence the action-packed book featuring LGBTQ+ diverse characters. Fans of Indiana Jones or the Marvel action series will appreciate this cinematic adventure.