A Study in Murder by Callie Hutton 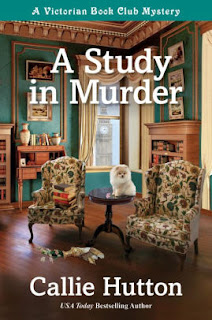 Whether you're a fan of Victorian mysteries or atmospheric fiction set in that time period, you might want to try Callie Hutton's A Study in Murder, the first in her new Victorian Book Club mystery series. Hutton has written bestselling historical romances, and she brings that background to this humorous new book.

Lady Amy Lowell is quite content with her life in Bath, England in 1890. At twenty-five, she's as independent as a single woman of the time can be. She supports women's rights, participates in a mystery book club, attends dances. She also writes a successful series of mysteries under a male pseudonym, although she would love to be recognized for her knowledge and writing ability. But, Amy is still dependent on her father who pushes her into a betrothal to Ronald St. Vincent.

When Lady Amy receives an anonymous note about St. Vincent's scandalous behavior, she immediately summons him to the house so she can break her engagement. He's angry, but she feels as if that's over.  She already has an appointment with a friend from her book club, Lord William Wethington, on the day that St. Vincent returns. She never does see the man that day, until she stumbles over his body in her library. But, her broken engagement makes her the prime suspect for the murder of her ex-fiance in her house.

Lady Amy is scared and nervous when she's accused of killing St. Vincent. But, she's not going down without a fight. The two police officers are sure she's the murderer. So, she resolves to solve the mystery on her own. She doesn't trust the police to uncover the truth. She enlists the help of Lord Wethington. They question their friends, research shipping lines and poisons. But, neither are quite prepared when their own lives are endangered.

At times, Lady Amy is a little over the top and naive, despite her intelligence. Her doting love of her Pomeranian comes across as a little odd when she takes him everyplace, even when she's breaking into a house. However, she shows promise as an amateur sleuth. She certainly has her reasons for setting off to find the truth since she is under suspicion.

A Study in Murder is a slow-paced cozy mystery, written with emphasis on the details of daily life in Bath in 1890. However, there are humorous moments, and I don't know when a final reveal scene was ever any funnier. I'm looking forward to the return of Lady Amy Lowell and Lord William Wethington.

You aren’t helping shrink my TBR list. I’ve already hit the maximum number of holds at the library and have one hold on my boyfriend’s library account.

My intention is NOT to shrink TBR piles, Sandy, but to build them!