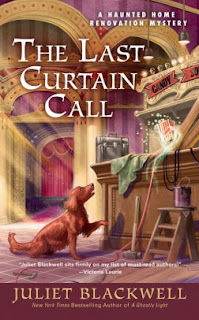 A Ghostly Light, the last Haunted Home Renovation Mystery, came out in 2017. However, Juliet Blackwell's fans have nothing to worry about. The author hasn't lost her touch. In fact, Mel Turner, "ghost-talking psychic home renovator" only seems to have grown more intriguing in The Last Curtain Call.

When Turner Construction is asked to renovate the historic Crockett Theatre in San Francisco, Mel's definitely interested. Yes, everyone has heard the stories that the theatre is haunted. Mel's more interested in all the architectural features in the historic building. She knows there are some issues. She's told she has to get rid of the squatters who are living in the theatre. And, there seems to be some funny business about permits and plans, and the previous construction company. Nothing she can't handle. But, when she finds an audience filled with ghosts and a murdered usher who offers to take her to her seat, she's not so sure. And, then someone takes one of the problem off her hands and kills a squatter. Mel suspects murder immediately. She is watching the dead woman dance on stage just as the body is found.

Although San Francisco homicide inspector Annette Crawford reminds Mel she doesn't work for the police department, Mel wants to find the killer. She has additional motivation because she's convinced there is a connection between the Crockett Theatre and the ghost of a starlet who is haunting the house Mel is renovating, her own house. Mel's exploration of Bay Area history is just one of the appeals of this series.

Fans of the long-running series will be intrigued by Mel's changing abilities. The Last Curtain Call brings her ghost-busting talents to the forefront. It's a fascinating story, filled with a couple creepy scenes in the theatre, along with area history, renovation details, and, of course, the wonderful characters in the series. Mel's family and friends add a touch of normalcy, a homey feeling to the books, despite the paranormal elements.

Don't hesitate to pick up this book, even if you haven't read earlier ones. Blackwell is skillful with her introduction of characters, and new readers will easily catch up. But, those of us who have been with the series since the beginning will enjoy this latest adventure.

This is another one I’m waiting for at the library

I know, Sandy. And, books are slow getting to the libraries from our jobbers.

I’ve got one in and four in transit. Hopefully I don’t get all 50 of my holds at one time.