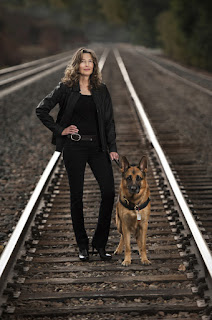 On Barbara Nickless' website, https://www.barbaranickless.com/, it says she was a technical writer, instructional designer, raptor rehabilitator, astronomy instructor, sword fighter and piano teacher before turning seriously to writing. She's the author of four Sydney Rose Parnell books. The fourth, Gone to Darkness, is released today.  I think you'll discover more about her in a very personal essay. Thank you, Barbara.

Walking upright is the simplest and most extraordinary of physical feats, a thing only humans do, striding along on two feet for great distances, sometimes merely for the scenery or to clear the mind. Among the mammals, apes have knuckle-walking. Bears and horses rear. Kangaroos hop. But only man bipedally places one foot in front of the other as a primary means of locomotion.

As a kid, I took full advantage of this fact, and with a kid’s energy, I ran everywhere. Zipping around the neighborhood. Dashing across open prairie to a friend’s house. They say girls love horses, but I think I wanted to be a horse. I galloped, cantered, loped. Dashed, hurtled, sprinted. To school. To the park. To the bookstore where the latest Nancy Drew was little more than a dollar and a comic book could be had for a dime. And most especially to the bookmobile, where, often as not, my mother would have to come get me because I’d checked out too many books to carry home. (This was before bookbags and backpacks were a part of daily life.)

The stories I read in my non-ambulatory moments fueled these walks so that when I strode forth, I was accompanied in my mind by characters who had also walked great distances. Frodo and Sam in Tolkien’s Lord of the Rings. The children in Walkabout by James Vance Marshall. I loved all the toing-and-froing in Emily Bronte’s Wuthering Heights and the bravery of Sylvia, Bonnie, and Simon in their two-month-long journey to London in The Wolves of Willoughby Chase. Later came James Joyce’s Ulysses, in which Stephen Dedalus and Leopold Bloom wander the streets of Dublin. And The Girl Who Loved Tom Gordon by Stephen King, where Trisha—separated from her family during a hike—heads deeper into the dark forest. Walking could be deliciously fraught with danger. At least in my mind.

When my son was born with terrible colic—and one of the few ways to soothe him was to put him in the baby backpack carrier—I slowed my pace. While he alternately cooed and dozed, I roamed far afield, listening to books on tape with one earbud in, the other dangling from its cord. Those stories remain with me, the narrative pounded in. Walking, it turns out, is good for readers.

Sidelined by shaky knees in my forties, I chose to slow rather than retreat. Running became jogging. Then, as the years rolled by, my pace dropped further. My verbs also slowed. I strolled, ambled, sauntered. Moseyed, dawdled, drifted.

When I decided to put my childhood dream to the test and commit to writing a novel, walking dovetailed perfectly with my plans. For it is a truth universally acknowledged that a writer in need of an idea must be in want of a walk. Dickens. Woolf. Woodworth and Thoreau—our greatest writers have been rambling for years. Thus I wrote Blood on the Tracks, a novel that features that most mythic of roamers, the American hobo.

Recently, walking has become more than a welcome chance for fresh air and clear thoughts. These days, I’m no longer ambling. I’m bolting.

Weeks before COVID-19 was labeled a pandemic and Colorado’s governor enacted stay-at-home orders, my family went into isolation. In mid-February, my husband and I lost that little boy who used to nap in my baby backpack. We lost him to something known as SUDEP—Sudden Unexplained Death in Epilepsy. The lovely boy had grown into a lovely young man who also loved walking. Who walked his age in miles every year. Who once traversed twenty-three miles in a single day just to visit a friend.

One night he went to bed, whole and happy. The next day he was gone. A man-shaped hole in the world that will never be filled.

Now I watch as the world suffers its own shock and grief and isolation. Writers and other artists struggle to find the courage to create. Readers pick up a favorite book and cannot focus. How do we find ourselves again?

Solivitur ambulando—it is solved by walking. So advised wiser minds than mine. I took up lengthy walks down empty streets and past abandoned institutions, up and down hills and stairways, standing in moments of utter solitude in vast parking lots, blinking into the abyss. These walks are the only way I can interact with the world right now. Not just because of the strictures of social distancing, but because of my grief. Talking with others is beyond me. My own mind is a trap, a dark wood that does not bear a full entering into. These walks allow me to focus on the physical. And when the thoughts come, I can steer them in more helpful directions: stories, plots, characters. Things that dwell outside my grief and apart from the pandemic and live inside the fantastical landscape every writer carries. Sometimes, those beloved characters from long ago once again walk with me, urging me to be brave.

I never expected to be faced with the death of one of my children. No one does. No more do we expect to be caught in the grip of a pandemic.

Sometimes, faced with terrible things, all we can do is put one foot in front of the other. 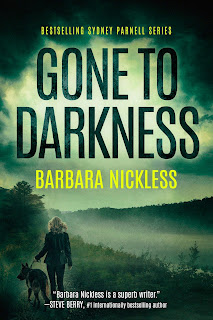 Here's the story behind Gone to Darkness.

From a Wall Street Journal bestselling author. Newly minted homicide detective Sydney Parnell faces a savage killer whose endgame is to capture her. And keep her.


Iraqi war vet and former railway cop Sydney Parnell is now the youngest homicide detective in Denver’s Major Crimes Unit. In the past, gut instinct has served her and her K9 partner well. But it’s not a trait Len Bandoni, her old nemesis turned reluctant mentor, admires. Not until Sydney’s instincts lead to their first case: a man tortured and beaten to death, then left in a refrigerated train car with cryptic messages carved into his body.
The victim is a well-liked member of an elite club called the Superior Gentlemen. At first glance, the club appears harmless. But beneath its refined surface swim darker currents.
As Sydney; her K9 partner, Clyde; and Bandoni investigate the grisly murder, the three develop a bond that carries them through a shocking series of crimes and a horrifying conspiracy that threatens the detectives’ lives and promises to bring their beloved city to its knees.

Walking was how I coped with many things before I became disabled back in 2010. It was a huge help and I miss it.

I'm sure you do, Kevin. It sounds as if Barbara Nickless really needed it in the last six months.

Thanks for this. I put a hold on the first book (I like K-9 mystery series) for when the library reopens.

So sorry to hear of your loss, Barbara. It's a terrible thing.

What a powerful and tragic essay! I'm so sorry for Barbara's loss of her son. I do understand about walking being good for the mind and how it can help in clearing and dealing with emotions. I use it for that myself. I never thought that it would become so important to me for a lot of reasons, but there it is. I'll check out her series. Thanks for sharing this with us, Lesa!

Lesa, Thank you so much for posting this column today and asking Barbara to write an essay for us. My dear friend from high school lost her young son suddenly last week and the visitation was today. I was very anxious and upset earlier today even though I cd not go out-of-town to be there. Opening up your blog just now and reading Barbara's essay consoled me just a little bit more. Thank you both.

I used to walk for many miles before osteoarthritis set in. I use a walking stick now for balance and try to move around as much as possible. I really do miss walking. It's really great for the mind and body. I'm really sorry for Barbara's loss of her son. I'm glad she's taken up writing. I'll have to try to get her book.

Thank you everyone for your thoughts and support. Liz, I will be thinking of you and your friend. I'm glad you're there for her. For those of you who find walking impossible or difficult, my heart goes out to you. I hope you've found another way to gain solace.

I think sometimes when we walk we are unconsciously walking toward a solution or resolution or getting a near as we can to peace. There is no sorrow greater than the loss of a child. I hope the walking soothes and comforts you.