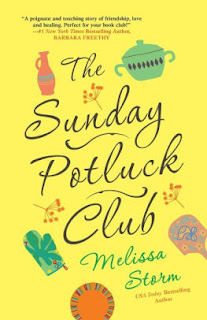 Amy Shannon. Bridget. Hazel. Nichole. The four women met when they were taking their parents to chemotherapy in Anchorage, Alaska. Hazel's father was the first to die, followed by Amy's mother and Hazel's. Nichole's father is in remission, and she has survivor's guilt. Why has she attended three funerals, and she's the lucky one whose father is still alive? The four women form the Sunday Potluck Club to continue their friendship and support of each other in the months after the chemo ends.

Now, three months after her mother's death, Amy's ready to take the first steps back to life. She's a second grade teacher, returning to her classroom. Two events shake her up. After picking up fast food on her way home, a dog runs in front of her car. When she slams on the brakes, a car slams into her. She's not shaken enough that she doesn't notice the handsome man who hit her, and then rushes off to pick up his kid after school. And, one of her students refuses to talk and is struggling. When she contacts Olivia's father, Trent, he turns out to be the man who rear ended her. He's also a widower whose wife died of cancer five months earlier.

While Amy struggles with her attraction to a student's father, Bridget is too over-the-top with energy following her mother's death. She's on break from veterinary school, so she volunteers at an animal shelter. Two weeks before Valentine's Day, she takes on a project to find homes for all the dogs and cats, a project called Date-a-Rescue. Suddenly, Bridget's project becomes a project for all of her friends.

Bridget's story is an essential element of the book, but the second book in the series will focus on her. This is Amy's story, "long-suffering, peacekeeper Amy", who chose her role in life, and in her group. There are a number of cliches in the book, especially in Amy's life. Although the book takes place in only a couple months, it's as if Amy has multiple personalities and emotional growth in that period of time.

As I said, I thought the story of four friends who connected at the hospital would have more depth than it did. There is little character development. We never really learn much about Trent, the man Amy falls for. I think that's what I missed in The Sunday Potluck Club. I wanted more depth and character development, more depth to Trent and his daughter, Olivia. The characters all just seemed a little too ready to move on. Yes, I agree that everyone grieves in their own way, another comment in the book. But, it seems unlikely that a second grader would be ready for her father to fall in love again just five months after her mother's death. As I said, everything seems just a little rushed in this book.

All I know is that this clearly is not a book for me with this subject matter. The fact it was done so poorly is unfortunate.

It definitely isn't for you, Kevin. And, I almost emailed you to tell you that ahead of time. But, thank you for linking to the review.

Always glad to link up. Don't know if it move the needle for you or not in terms of viewership, but, I try.

I know, Kevin. You never know when someone will click and become a regular reader. Thank you.