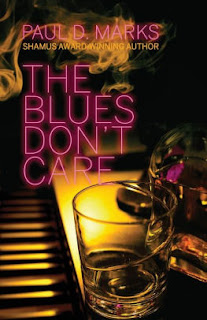 As much as I loved Paul D. Marks' mystery, The Blues Don't Care, it's going to be a difficult book to review. The summary won't give away anything that isn't on the book jacket. However, I'll never be able to capture and define the voice and the atmosphere Marks creates for this engrossing story.

Bobby Saxon's life is a revelation to his daughter, Diane. She didn't know about his life in LA in the 1940s. But, Booker "Boom-Boom" Taylor. leader of a hot jazz big band of that era, has a story to tell about Bobby Saxon. Bobby was a talented piano player, the only white musician in Taylor's all-black swing band. But, Bobby had to become something he was not, a detective, in order to make his way into the band. In fact, Bobby spent his whole life hiding the truth. He was born Roberta Saxon, but, in order to make his living as a musician in the 1940s, he had to live as a man.

Saxon met Taylor at Club Alabam, a black club in LA. He was invited to accompany the band when they performed on the gambling ship Apollo. And, he witnessed the argument between one of the band members, James Christmas, and a German guest on the ship. When the German, Dietrich, was found murdered, it was easy for the police to arrest James. That arrest was a turning point in Bobby Saxon's life. Booker told him if he wanted a permanent spot in the band, he had to solve the case, and find out if James was guilty or innocent. The only qualification Bobby Saxon has to be a detective? Booker calls it a passport. Bobby Saxon is white.

Marks manages to combine so many elements in a complicated mystery. Of course, there's Bobby's own issues with his transgender identity at a time when it wouldn't be accepted, and Bobby himself was confused about it. There are racial issues, issues of acceptance of blacks in white neighborhoods, restrooms, clubs. However, the racial issues went both ways. While Bobby felt comfortable in a black club, he wasn't as comfortable in a black hotel. There are issues too embedded in the mystery to discuss, issues of World War II.

While The Blues Don't Care is a complex, sometimes brutal, story, it also has its glimmers of beauty and joy. Those glimpses come from Bobby's passion for music, and his awe when he sees celebrities such as Clark Gable and Billie Holiday. Wander into Bobby Saxon's world in Paul D. Marks' latest book. It's a world you won't easily forget.

Wow. What a great review of what looks like a complicated and fascinating story.

Thank you, Terry. Not an easy book to review with spoiling too much.

Thank you, Lesa for the great review!