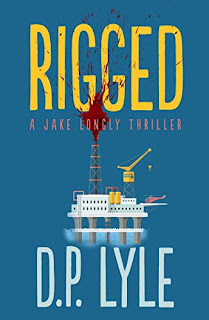 From what I've read, the first books in D.P. Lyle's series might have been thrillers. But, the latest "Jake Longly Thriller", Rigged, is not. It was fun, and I really enjoyed the characters. Jake reminds me a little of Archie Goodwin with his wisecracks. He also reminds me of all of those private investigators who are run over by women.

When Rigged opens, Jake is on trial. Fortunately, his ex-wife's new husband, a savvy attorney named Walter Horton, gets him off. Walter later hires Longly Investigations for another case. That firm is owned by Jake's father, Ray, and he sends Tommy "Pancake" Jeffers to Fairhope, Alabama on that case. Pancake and Jake both went to school with Emily, and she was Pancake's sixth-grade girlfriend. Now, she's Emily Patterson, and she hired Horton as her divorce attorney. He wants Longly Investigations to dig into background. What does he need to know about Emily and her husband, Sean?

Pancake, who knows his way around computers, knows all about the Pattersons' finances. Everything looks good. But, Emily doesn't show up for her meeting with him, or for her job, and her employer says she's reliable. After a few other meetings, Pancake goes looking for her. Because he finds her car, and her new boyfriend's truck at her house, and no people, he contacts the local police department. However, it's a neighbor who finds the bodies of Emily and Jason, shot in the back of the head, execution-style. Now, Pancake calls in Ray, Jake, and Jake's lover, Nicole. The police chief agrees to share information with them, and for one dollar they take the case on behalf of Emily's brother.

Sean, Emily's husband, has a sound alibi. He was working on an oil rig out in the Gulf. So, the team decides to investigate the drug angle. They split up, and Ray and Pancake team up for one course of action, while Nicole and Jake ask questions locally. The team meets up regularly with the police chief for reports. And, sometime in the course of the case, Jake has a wild idea or two as to what might have happened.

I really enjoyed Rigged, and I recommended the series to my brother-in-law. Humor, the sexual innuendos, jokes about Pancake's appetite, the investigation. But, Rigged wasn't a thriller. It was good detecting work with a quirky cast. Just my kind of cast of characters.

IIRC, I read the first two books in the series, and they're definitely more mysteries than thrillers.

Thank you, Glen. I hadn't read them, so I didn't know. Sometimes, the marketing is so wrong. Thrillers make the most money. Let's call it a thriller, although his audience for this would fall in the mystery market.