Meet Your Baker by Ellie Alexander 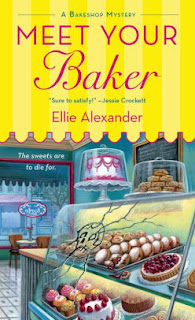 One of my librarian friends has been recommending Ellie Alexander's Bakeshop mysteries to me for a couple years. I finally picked up the first in the series because I was so satisfied with the forthcoming book in Alexander's Sloan Krause series. I like the solid cast of characters, small town, and the ongoing storylines with character development. It looks like the Bakeshop series, beginning with Meet Your Baker, will have the same.

Juliet Capshaw left Ashland, Oregon for culinary school, and then didn't return. She fulfilled her dream of sailing the world, working on cruise ships, and even married a chef. But, her discovery of letters written to Carlos sends her home to her mother, the family bakery, and the small town known for the Oregon Shakespeare Festival. But, there's trouble in Ashland, both with the bakery and with the OSF, as residents fondly call the festival.

The delicious pastries made by Jules and her mother draw all kinds of people. One is Nancy Hudson, who seems to be an obnoxious woman even when Jules meets her. She uses her money and position on the festival board to try to take over control of the festival. When Jules finds her body in the unlocked bakery early one morning, the police look at the people who were in the bakery for a midnight meeting. One more problem for Jules' mother, who is already worried about keeping the bakery afloat.

Because Jules' high school boyfriend, Thomas Andrews, is a deputy, he makes the mistake of asking her to listen to the chatter in the bakery. That request pulls Jules further into the case, and, even after a couple attacks, she's unwilling to give up her role in the investigation. Before a killer is caught, Jules is caught up in a sticky mess.

Meet Your Baker is the first in Alexander's earlier series, and she's written two other series, plus the Sloan Krause one. As an author, she's come a long way since this mystery. I enjoyed it, and I picked up the next two in the series. However, Jules is too impulsive in this first book, and she has one of the worst traits of an amateur sleuth. She tries to beat the police to interview people, or tries to beat them to a scene to investigate. In comparison, Sloan Krause turns everything she knows over to the police. And, in this one, it didn't take me long to figure out who dunnit.

However, there are personal issues that will continue in future books, just what readers of a series expect. And, I like the characters. It's unusual for a deputy to also deliver flowers from his parents' florist, but it works with the small town setting. Alexander is skilled in developing the setting, a tourist town that draws visitors, but is also forced to deal with Oregon's environmental issues when there's a nearby fire. And, just as in the other series I'm reading, the author instructs readers as to the profession of the protagonist, keeping the story interesting and flowing at the same time.

So, my friend is right. The setting, the bakery, the characters. I already have the next book, A Batter of Life and Death.

Note: If your library is still closed, but you can check out online items through them, Meet Your Baker might be available through Overdrive and your public library. Remember, libraries do purchase these items for your use.

I really enjoy this series. There’s a new one coming out which I have on hold at the library. On a positive note this week my library started doing curbside pickups by appointment and I was able to get two of the books I had on hold. They are transferring books between branches so I have at least one more coming. They still won’t take returns though.

Good morning, Sandy! I have checked out the next two in the series. We've been taking returns for the last couple weeks. We start curbside on Monday. Other libraries I know are starting on Monday, too. We'll see how this all goes.

I've got this one, but I haven't read it yet. I have enjoyed her Meg Reed series written under Kate Dyer-Seeley. Set in Portland and involving an outdoor journalist. I love her descriptions of Oregon. I really enjoyed talking to her at the Phoenix Left Coast Crime. We talked about Oregon and I keep meaning to try another of her series. I don't end up reading cozies all that often though. Hope you have a good weekend and upcoming week, Lesa!

Thank you, Kay! Just finished my Treasures in the Closet post for Monday, so I'll be able to relex the rest of the weekend. I have a good book. (smile) You have a good weekend and upcoming week as well!

I have the feeling the author loves Oregon. All of her books are set there, and she does a beautiful job of describing the area without being so description that you don't care anymore.