Three day weekend. Wouldn't you think I would have a couple books backed up for the blog? Actually, I've been reading for Library Journal instead of for me, although I read two good books. You won't see reviews until August and October, though, from that reading. So, right now, I'm sharing one of Sandie Herron's reviews, the audiobook of William Kent Krueger's Blood Hollow. Thank you, Sandie. 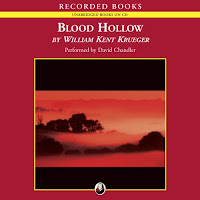 It is January 2nd when Cork O’Connor, former sheriff of Aurora, Minnesota, helps with search and rescue under the retiring Sheriff Wally Shanno.  On New Year’s Eve, teenaged Charlotte Kane took off on a snowmobile on a trail that broke off into dozens of others.  An oncoming blizzard cut the search and rescue short with no satisfaction.

Spring came, and Charlotte’s body was found in a snow bank.  Despite his no longer being the sheriff, Cork often found ways to accompany law enforcement.  The new sheriff, Arne Soderberg, was more interested in his political career than the duties of sheriff, and he ran Cork off the scene, ignoring his advice.  Bigotry and bureaucracy raised their ugly heads.

These days Cork runs Sam’s Place, a burger stand in an old Quonset hut on the shores of Iron Lake left to him by Sam Winter Moon.  Sam’s sister Dot comes to see Cork along with Cork’s wife Jo, explaining that Dot’s son Solemn has disappeared and that the sheriff is looking for him.  Known for his temper and occasional disappearances, Dot isn’t worried about Solemn, but the sheriff wasn’t going to be content and wait for Solemn to show up.  Cork knows exactly where to find Solemn, a place full of Sam’s spirit deep in the woods.  Shortly afterward, Cork and Jo, now Solemn’s attorney, accompany Solemn to the sheriff’s station where he turns himself in.  The evidence connecting Solemn to Charlotte’s murder is overwhelming.  The sheriff seemed to think Solemn would confess, Perry Mason-style, but Solemn bolts and runs.

Elder and Midewiwin Henry Meloux, member of the Grand Medicine Society, lives on Iron Lake and helps Solemn complete giigwishimowin, the ritual where a boy is sent into the woods to live off the land until a vision comes to him which will guide the rest of his life.  Not until Kitchimanidoo had granted him the vision was the young man to return, changed from boy to man.  Solemn’s quest took 16 days.  Then he was ready to face up to the white man’s laws and prove his innocence.

As I listened to the audio version of this book, I could sense the cold, smell the cut grass, feel my breath stop with danger.  Author Krueger, via narrator David Chandler, has an easy flow to his words that are filled with spirituality and teachings and miracles.  Not only does he present a mysterious problem to be solved, but also much more poignant dilemmas to be considered.  I think mostly with patience that the rightness of the world will win in the end.  Perhaps Cork O’Connor is beginning to find the peace he has been seeking.