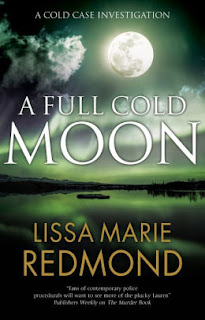 I read and enjoyed Lissa Marie Redmond's second Cold Case Investigation, The Murder Book. The fourth and latest one, A Full Cold Moon, is even better. However, I have to say Redmond is tough on her detectives of the Cold Case squad. Lauren Riley was knocked out of commission in the earlier one. Now, her partner, Reese, is laid-up with a work-related injury, and he and his dog, Winston, are sacked out at her house.

Buffalo police detective Lauren Riley is temporarily working Homicide while Reese is gone. Her shift should have been over when she catches a new case. Gunnar Jonsson, a visitor from Iceland, was brutally killed in an alley, just feet from his hotel. Lauren fights for this case, but Reese is the only one who understands why this case reminds her of an earlier one she's still working. Both cases took place under a full cold moon.

This is a case with connections in two countries. Was Gunnar killed because a DNA test led him to the U.S., and a father he never knew? Before Riley even has a chance to delve deeply into the investigation, the top brass send her and an FBI agent to Iceland. They want to know if the murder involves an influential Icelandic businessman who was in the states at the time. Although Reese is convinced the killer is still in Buffalo, they send the two to another country to investigate.

The trip to Iceland throws Riley and Special Agent Matt Lawton into a culture and case in which they're dependent on their Icelandic police connection, Detective Berg Arnason. Neither speak Icelandic, and the local police seem more interested in political issues than the murder case. Despite Berg's laid-back manner, the search for a killer proves to be just as violent as any investigation in the U.S. When a hit-and-run driver targets the trio, it appears the case may have an unexpected Icelandic connection. There are surprises at every step of this carefully laid out police procedural.

Lissa Marie Redmond is a former cold case homicide detective for the Buffalo police department, who spent twenty-two years on the force. She brings all of her experience and knowledge to this intriguing mystery that spans two continents. While you can read A Full Cold Moon by itself, why would you want to? I suggest you start with the first Cold Case Investigation, A Cold Day in Hell. Fans of police procedurals won't be disappointed.

I agree that the Cold Case investigations series should be read from the beginning. Having travelled to Iceland twice, I really enjoyed this added dimension of sending the Buffalo detectives there.

I haven't been to Iceland, Grace, but I liked this as well. It showed the differences and similarities in police departments in the two countries. And, I liked the Icelandic police officer, although that really is just a personal preference, not a reason to pick up the book.

I really like this series and can't wait to read this one. The Icelandic connection sounds really interesting as well. Hope it will continue after this book!

I hope so, too, Kay. I'm liking this series as well.

This is a great series, although I haven't yet had a chance to read this latest. Glad to hear it's even better!

I was scrolling the internet like every day, there I found this article which is related to my interest. The way you covered the knowledge about the subject and the best group in bhopal
was worth to read, it undoubtedly cleared my vision and thoughts towards Best group in Bhopal
. Your writing skills and the way you portrayed the examples are very impressive. The knowledge about best group in Bhopal
is well covered. Thank you for putting this highly informative article on the internet which is clearing the vision about who are making an impact in the real estate sector by building such amazing townships.