The Body in the Garden by Katharine Schellman 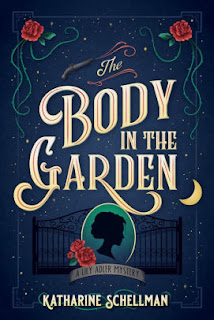 Crushed. I was just crushed when I went to review Katharine Schellman's debut mystery for a mystery column, and someone else had been assigned to the book. They better write a good review, because I loved this debut, and I'm looking forward to the next one. But, in the long run, you and I won. I have an interview with Katharine Schellman for tomorrow's blog. I hope you stop back to "meet" her.

The first Lily Adler mystery, The Body in the Garden, introduces an intrepid heroine, and beautifully describes Napoleonic-era London and society.

In 1815, eyes in the neighborhood notice when Mrs. Lily Adler moves into a rented house in Mayfair. By her dress, it's obvious she's a widow, no longer in the first stages of mourning. And, she must have the money to afford to live in Mayfair. What isn't so obvious is that Lily Adler has a strong sense of right or wrong, and she'll be determined to find answers when she hears a murder.

Lily's best friend from school, Lady Serena Walter, invites her to a ball at her London home. Because she's still in mourning, she can't dance. That doesn't stop a man from making improper advances, so Lily escapes to the gardens. It's there that she hears two men, one threatening blackmail. She's still sneaking away when she hears a gunshot. Lily escapes to the house, finds her late husband's best friend, Navy Captain Jack Hartley, and the two return to the garden. They're the ones who find a body, and report it to Lord Walter. When Lily sees Lord Walter bribe the investigating magistrate, she decides to take matters into her own hands. With the help of Captain Hartley and a mysterious debutante from the West Indies, Mrs. Lily Adler undertakes a murder investigation.

Schellman has introduced two intriguing heroes in her first mystery. Lily Adler is the hero of her own story. She's "obviously intelligent and level-headed and not prone to wild imaginings". While still mourning the husband she loved, she knows it's time to move on with her life. And, the murder investigation, while exciting, might not be quite proper. That's one strength of this book. The author emphasizes society's rules and expectations, and shows how uncomfortable people are when they don't fit within those expectations. "Lily, for all she could be unconventional from time to time, had no desire to lose her place in society. Was it really worth risking so much?" Through Lily's eyes, Schellman shows just what could go wrong.

Captain Jack Hartley is actually a secondary hero. He was Freddie Adler's best friend, and he starts out by trying to help his friend's widow. But, he grows to respect Lily as her own person, an intelligent, stubborn woman, determined to find justice for a victim. Jack's career as a captain in the navy will allow him to come and go in the series, if that works with the author's plans. His career also allows him to move in several circles in society.

Schellman's debut is a complex story of London society with its social classes, racism, and politics. Readers of historical mysteries should relish this new entry in the genre. At the same time, fans of historical romances set in this period might just want to take a chance on the book. Schellman's details of balls, the theater, concerts, and the social life of 1815 are too good to miss. The Body in the Garden is an outstanding debut.

*****
FTC Full Disclosure - I received the book from a journal editor.

Sounds wonderful, so I just purchased the Kindle version which will be released tomorrow. Once again you come up with wonderful, enticing books to read. And the list grows and grows.

Thank you, Netteanne. Yes, tomorrow is actually release date. I hope you like it as well as I did!