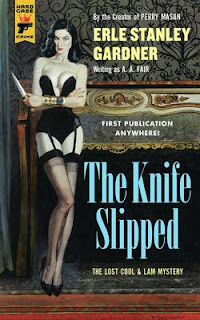 What do you read when you can't concentrate? How about a forgotten classic? I'll admit my definition
of a classic may be different, but I find that an unpublished Cool and Lam mystery qualifies. The background for Erle Stanley Gardner's The Knife Slipped is fascinating.

Written in 1939, and finally published in 2016, The Knife Slipped was meant to be Gardner's second Cool and Lam mystery, published under the name A.A. Fair. However, Gardner's publisher objected to Bertha Cool's foul language, heavy smoking, and her behavior in general. So, Gardner wrote a new mystery, Turn on the Heat, and this one remained unpublished for decades. When I read Russell Atwood's Afterword for the book, it confirmed many of my impressions of the story.

Donald Lam, narrator of the story, works for Bertha Cool, owner of B. Cool, Investigations. He's young, naive, and, as is typical for so many hardboiled detective novels of the 1930s and 40s, he falls for a dame. Bertha Cool is tough, abrupt, abrasive at times, but her name matches her personality. She's cool under pressure, and, in this story, takes the young disbarred lawyer turned investigator under her wing to teach him the ways of the world.

Cool accepts a case many other agencies won't handle. She sends Lam to follow the supposedly cheating spouse in what could turn into a divorce case. But, when Lam follows the man, the apartment isn't exactly the love nest they expect. Instead, while he watches, officers from the fire department and police department show up, asking for the man Lam is trailing. It's Ruth Marr, the switchboard operator, who identifies the man under a different name. It isn't long before Donald Lam is falling for the attractive blonde, believing everything she says, even when she shows up at his car with a gun.

Crooked cops, blonde dames, politicians, graft and payoffs. While the story seems to follow a formula, it's unusual to see the investigating detective agency blackmailing people. But, Bertha Cool, at least in this story, is out for whatever money she can get. She's a brash, over-the-top character. While she's the confident leader, Donald comes across as an innocent man who believes "Essentially people are honest." His boss proves that everyone is out for what they can get. But, she truly cares for Lam, and cuts him a break in the story.

It has been years since I read a Cool and Lam story. I didn't remember Lam as quite such a sucker, and Atwood's note reminds readers that he wasn't in the following twenty-eight books in the series. But, it's fascinating to go back and read the mystery that might have been a transition piece, if only the publisher had given Bertha Cool a break.

I put this one and some other Gardner book on my library list. Of course it will be a while before I can get them. I can wait.

I've been meaning to read this ever since it came out. I am a big Gardner fan (though I haven't read much of him lately, other than several collections of his old pulp stories, which are great) and like the Cool & Lam series a lot. Yeah, Bertha Cool is not exactly ethical, is she?

Those Gardner books are a nice escape right now, Gram. Now, I have the first in David Rosenfelt's new series.

I think I've had it in my pile since it first came out, Jeff. Look! I actually read a book that I've owned for a while. No, Bertha isn't ethical, but she comes through in this book.

I enjoy the Cool and Lam books and will put this one on hold once our library opens. However I am so jealous that you have the newest David Rosenfelt. Loved the dog and look forward to the new series. I never miss a Rosenfelt book of any kind.

What a fun post today, Lesa. My mother was a mystery fan and that was my introduction to Perry Mason, Cool and Lam and other. I still have some old paperbacks on my shelves. Bertha might not always be the most honorable person, but those books are great reads. Thanks for the reminder. I think I'll go see what's on my shelf!

I'll have more to say about the book tomorrow, Netteanne, for What Are You Reading? Liking it so far, although the dog hasn't yet had a major role.

Oh, good, Grandma Cootie. A librarian never cares if you're reading new or older titles. You're welcome for the reminder! I'm glad you enjoyed the post!

I remember plowing through Perry Mason novels way back when. But! Cool and Lam?! Totally new to me. Thank you, Lesa, I think I'm off to introduce myself to Bertha; she might become my new bestie.

I have this book.

It is a bit different than most of the other novels in the series,and shows how the series could have gone in a different direction.

That said, the entire series is well worth reading.

Kaye, Read Glen's note below. My sister, Linda, and I were talking about these books today. She's another one who plowed through the Cool & Lam books years ago. I read more of the Perry Mason ones, but I read some of these as well. Kaye, I think you're going to like Bertha.

I agree, Glen. Loved the Afterword of this one.