The Bramble and the Rose by Tom Bouman 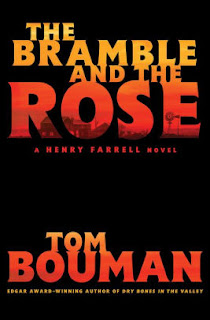 Tom Bouman's debut Henry Farrell book, Dry Bones in the Valley, went on to win the Edgar Award in 2015 for Best First Novel. The third book in the series, The Bramble and The Rose, is descriptive of the rural Pennsylvania wilderness, with several intense, dramatic scenes. However, Henry Farrell himself is the reason I found the book intriguing. He's not your normal police officer.

Farrell is a loner, prone to anxiety and depression. He had left his home territory of northeastern Pennsylvania when he moved to Wyoming and married. But, he's now back in Wild Thyme Township, where he's the entire one-man police force. However, Henry would rather be out hunting and fishing than investigating crime. In this rural area, the criminals are likely to be Henry's neighbors or acquaintances.

Henry has just remarried and returned home from his Florida honeymoon when everything goes wrong. He and his wife, Julie, find his parents, sister and her kids installed in their home when they return, stranded there by his brother-in-law. His nephew, Ryan, feels deserted, and doesn't want to start a new school. Henry and Julie move into a cabin, so he doesn't really see the turmoil with his family.

Then, there's that body without a head. Henry doesn't believe a bear killed the victim. Yes, a bear chewed on the body, but something else killed him. And, when Farrell learns the man was a retired cop, an investigator, he's even more suspicious. Before he can investigate further, he becomes the primary suspect in the murder of a woman he had an affair with. How does a man keep that relationship a secret from his new bride? When police officers gather to question Henry, he runs. He has bigger problems. Ryan, his nephew, has disappeared.

The Bramble and the Rose builds to an intense conclusion as Henry and Ryan find themselves prey of men who know the woods as well as Farrell does. The atmospheric mystery is compelling with a powerful ending. Fans of C.J. Box or Craig Johnson's Longmire books might want to try this series, if they have haven't yet discovered it.

Had not heard of this series....as a big fan of Box and Longmire, I just slapped holds on earlier books over at the Dallas library. Thank you.

You're welcome, Kevin. And, the first one won an Edgar!