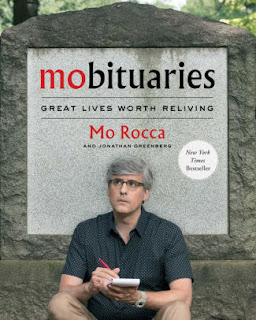 While Mo Rocca's fascinating book, Mobituaries is subtitled "Great Lives Worth Reliving", it's actually
a collection of intriguing essays that celebrates unusual trivia about everything from trees that were killed to celebrities who died on the same day. The essays are filled with facts as well as Rocca's insertions with his own opinions and humor. If, like me, you're having a hard time concentrating nowadays, it's the perfect escape. And, if you're having a hard time finding a book right now with so many libraries and bookstores closed, you can still listen to Rocca's Mobituaries podcast, https://www.mobituaries.com/the-podcast.

Mo Rocca says he loves obituaries, but, "Not everyone has gotten the send-off they were due - which is where this book comes in. A Mobituary is an appreciation for someone who didn't get the love she or he deserved the first time around." He even includes tributes that aren't actually for people. Dragons were thought to be real, so they're included. There are tributes to the death of disco and station wagons. As mentioned earlier, there are tributes to trees, including one that I enjoyed because it seems personal. You'll have to check out "The Spaghetti Tree" hoax, born April 1, 1957, the same day I was born. There's even a tribute to the first great wall built to keep out people from another country.

Rocca has a fondness for little known stories of the presidents. One chapter, called "Before and After" covers Herbert Hoover and John Quincy Adams. Hoover's story is particularly engaging. It stresses his enormous success before he was president. Adams' tells of his career after the presidency. Like Jimmy Carter, he was much more successful after his one term. There is also a follow-up section that covers failed presidential candidates.

The book includes some tributes that would have been larger if two celebrities had not died on the same day. The news of Farrah Fawcett's death would have been "above the fold" in the newspapers if she hadn't died on the same day as Michael Jackson. Rocca gives her an appropriate tribute. Of course, many of us know that Thomas Jefferson and John Adams died the same day, on the fiftieth anniversary of the signing of the Declaration of Independence. But, what about Sammy Davis Jr. and Jim Henson? Who received the headlines?

There are essays on a number of celebrities, Audrey Hepburn, Sammy Davis Jr., Marlene Dietrich. But, the one that brought tears to my eyes was the article about Elizabeth Taylor, not as an actress, but as an AIDS activist. And, her speech when she accepted the Jean Herself Humanitarian Award at the 1993 Oscars is just as relevant and moving today as it was then. I can't do any better than to repeat the ending quote from that speech. "I call upon you to draw from the depths of your being to prove that we are a human race. To prove that our love outweighs our need to hate. That our compassion is more compelling that our need to blame. That our sensitivity to those in need is stronger than our greed. That our ability to reason overcomes our fear. And that at the end of each of our lives, we can look back and be proud that we have treated others with the kindness, dignity, and respect that every human being deserves." That speech seems so timely today.

Mo Rocca can look back and be proud of this book, funny at times, moving sometimes, but always engrossing. Check out Mobituaries, either in book form or on his podcast. And, it would make an excellent present for someone who enjoys historical trivia and anecdotes.

Hi Lesa - this book sounds interesting. I often listen to ‘Last Word’ on BBC Radio 4, in which they discuss the obituaries of the recently deceased - usually less famous people who have not made the big headlines. It’s always fascinating. They’ve never done one for a tree though!

Something else I am delving into on BBC Sounds (previously BBC Radio I-Player) is their huge archive of Desert Island Discs programmes. Although not everything was saved from the beginning, many editions were and a few go back right to the start of the programme. I love hearing people’s record selections, and the book they choose to take with them to their fictional island. The point they often make is that your favourite book might not be the best one for this purpose - you need something that stands rereading many times. (They already provide the Bible and the Complete Works of Shakespeare.)

But I digress as usual. I hope your day is going OK and that you and all your family are safe and well. Your cats will be enjoying having you home.

Rosemary, You would love this book. It's filled with digressions! I wish I'd said that in my review. I thought those were some of the most enjoyable parts of the book. How many books are you allowed to take to that desert island? Just one? I guess I'd take another collection of essays that I often read when nothing else suits - an older title called A Thread of Blue Denim by Patricia Leimbach. The title really means a thread of farm life runs through all of her essays. See! Now, you have me writing off-topic! That's okay.

My day is ok. On top of everything else, we had a tornado warning yesterday. Sirens and cell phones went off, and we were told to "Take shelter now". I should have listened to the cats rather than the sirens. They weren't bothered, and Josh slept through it. But, my Mom saw it on the Weather Channel from another state, so I called and she and I had a nice conversation.

Hugs, Rosemary. I hope you and your family stay well.

Thanks Lesa, and I'm glad your tornado did not materialise! Makes me think of the Wizard of Oz and the rush to get down to the shelter.

A Thread of Blue Denim sounds good, I will look it up. Have you ever read the Vinyl Cafe books by Stuart Maclean (I think he is Canadian.)? The first one was 'Home from the Vinyl Cafe: A Year of Stories' and I think there are quite a few more now.

On Desert Island Discs they are allowed 8 records, a book, and a 'luxury item' which must not be anything practical. There have been some unintentionally hilarious editions in the past - one opera singer notoriously chose 8 of her own recordings. And I find it's often the less famous people who are more interesting. I wasn't sure I'd enjoy listening to the woman who founded the Ann Summers sex shops, but she was excellent - her father ran a chain of old style porn shops, and when she took over she decided that women, not men, should dictate what they wanted, and should not be embarrassed about shopping for it. She had had some real tragedies in her life too, but had worked through them. I ended up admiring her a lot.

Speak soon Lesa (because as you know, that is one thing I am probably rather too good at...) x

I've never read nor heard of the Vinyl Cafe books. Now, I'll have to look those up, Rosemary.

I'd have a harder time picking 8 records. As much as I enjoy music, I don't know if there's much I'd want to listen to over and over again. You're right. That's a little self-centered to pick 8 of your own recordings. Hmm. A luxury item. There's never been a cat that was practical, unless they discounted it because cats might catch mice or rats. I'd take a cat if they'd let me pick that.

My husband received this book for Christmas, but it is still sitting in a pile of "stuff" he has near his chair. I may have to borrow it and read it since it does sound interesting.

Me again Lesa - maybe that's an idea for one of those days when you haven't finished the book you meant to review - 'Desert Island Books'? Actually I might use it for my own blog too!

I think I did go to an event based on this in the Fringe a couple of years ago, at one of the city centre churches. They had invited the author Bernard Maclaverty to choose his 8 books or pieces of music and talk about them. I had never heard of him before (he is Irish but lives in Scotland) and he was a wonderful man, so warm and interesting. Since then I have acquired a couple of his books, Grace Notes and Midwinter Break, but I haven't got round to reading them yet (surprise!)

And I think a cat is an excellent 'luxury'- as you say, ours serve very little practical purpose so it wouldn't be cheating! Mine is curled up on my lap right now, giving me backache....

Hugs back to you Lesa. Have a good evening. x

He'll never even know you swiped it, Sandra. As someone who has a pile of unopened books beside me, I know that. Go for it!

I'm so glad cats fit the luxury item! I just don't know which cat I'd take! Probably Josh; he's the lover of the group. Mine serve no practical purpose.

I love his podcast and this might be the perfect time for this book since my concentration isn't all that great right now. I'm wondering how it would be on audio...I have an Audible credit burning a hole in my pocket.

Tina, I'm guessing it would be fun on audio, as long as he's the one reading it.