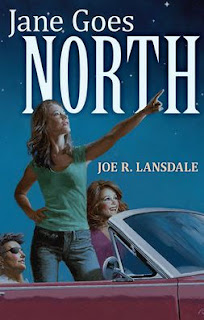 There are two groups of people - those who liked the Three Stooges, and those who didn't. I'm definitely in the second group. I never cared for broad, slapstick comedy. Those in the first group might appreciate Joe R. Lansdale's standalone picaresque novel, Jane Goes North.

After eight years working at a laundry in East Texas, Jane loses her job when she fails to remove a ketchup packet from a jacket pocket. The jacket is ruined, as is Jane's hope to pay rent on the lot for her trailer. When she receives a wedding invitation from one of her sisters, she decides she might as well go. She knows her sisters won't expect or welcome her, but that makes her all the more determined to make the trip.

She finds a note on a bulletin board that says a woman named Henrietta is looking for someone to share a ride north. When Jane meets Henrietta, she learns she'd prefer to be called Henry. She's a big woman who lifts weights, has one eye, an attitude, and a suspended license. However, she does have a car. And, despite the war of words between the two opinionated women, Henry picks up Jane the next morning, and turns the driving over to her.

The misadventures the two have along the way begin the first night they sleep in the parking lot of a twenty-four hour store. Jane is accosted by man who steals panties from her bag, and she's followed to the car by a thief in a mobile chair. From there, their adventures go downhill. The two women are kidnapped when they stop for gas, but manage to free themselves and a bunch of other women. It's the kindness of a liquor store clerk and a country singer on her way down that set them on their path north again.

While I wasn't crazy about the crude humor or outrageous adventures on their road trip, the bold Henry was an interesting character. And, she becomes even more interesting at the surprising end of the book.

Take my review with a grain of salt. Readers who enjoy Lansdale's books, misadventures on a road trip, or the Three Stooges, may appreciate Jane Goes North more than I did.

I’m not a fan of the Three Stooges, but I do like Lansdale and this sounds fun. Thanks for sharing your thoughts.

You're welcome, Shelleyrae. I hope you enjoy it. Let me know what you think when you get around to it.