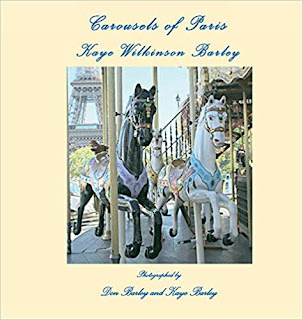 I interviewed Kaye Wilkinson Barley when her book, Carousels of Paris, came out, but I haven't had a chance to review it. Let's talk about this unique book featuring the history and photographs of some of Paris' beautiful carousels.

Kaye Wilkinson Barley sees a carousel as an invitation to dream. Her obsession with carousels is an invitation for readers to dream, to dream about carousels and Paris itself. This collection invites readers to travel along with the two photographers, Kaye and her husband, Don Barley, as they uncover the history and magic of carousels.

While the captions and history are essential elements in the book, Barley allows the photographs to speak for themselves. The horses! The personalities of the carousel animals. Not only horses, but giraffes, elephants, pigs. There are dancing, smiling horses that appear to perform airs above the ground. There are whimsical mermaids, ferocious dragons, and, my favorite carousel rabbit. You don't have to look too hard to find the photographers caught up in the magic. Sometimes, it took a little stealth for them to discover the magic, as in the story of their experiences in the Jardin des Plantes with the Dodo Manege, a carousel that features extinct and endangered animals. Have you ever ridden a dodo or a Tasmanian devil?

In her research, Kaye Wilkinson Barley did not find a book that focused on the carousels of Paris. And, according to the introduction, this book is incomplete. There are many more carousels to be uncovered in the city of romance and lights. It's also a city of hidden places, of enchanted horses and other creatures, all waiting for readers to discover in the magical photos in Carousels of Paris. Settle back into your memories of a child's dream.

*****
FTC Full Disclosure - I received one copy of the book as a gift from the author, and I bought one, with no promises that I would review it.
Posted by Lesa at 3:00 AM

i don't even have words for how much i love this - and you.
xxoo

I love you right back, Kaye. But you know I only write honest reviews.

This sounds like an amazing book that would inspire you to love carousels if you didn't already. Congrats Kaye.

It is, Mason. Just a charming book with enchanting photos.

Can't wait for the 2nd book in this series!

I'm going to pass that on to Kaye, Gram, in case she doesn't see this comment. She'll be so pleased. I'm sure she can't wait to get back to Paris, too.

Hi Mason! Hi Gram! Thanks for dropping by both here at Lesa's and at my place - and for the kind words!! Back to Paris?! Let's go and celebrate once we're all able to travel again.