A Murderous Relation by Deanna Raybourn 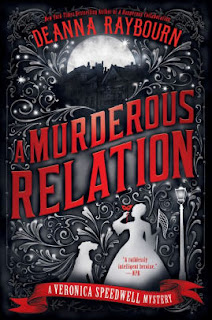 Deanna Raybourn brings Veronica Speedwell and Stoker back in an exciting mystery set at the time of the Whitechapel murders, Jack the Ripper. A Murderous Relation has so many connotations in this masterful story of family secrets and masquerades. And, the sexual tension left over from the last book, A Dangerous Collaboration, hangs over the relationship between Veronica and Stoker. No matter what their emotions, they're always there to defend and protect each other.

In autumn of 1888, Lady Wellington Beauclerk, Lady Wellie, brings a royal visitor to ask a favor of Veronica and Speedwell. Prince Albert Victor, known as Eddy, Queen Victoria's oldest grandson, has been a little rash, giving a gift of a diamond star to Madame Aurore, the owner of a high-class brothel. But, Veronica has had enough of doing favors for the royal family, and she turns down the request when she and Stoker are asked to retrieve the jewelry to prevent a scandal and possible blackmail. But, when Lady Wellie suffers from an illness after the refusal, Veronica and Stoker search through her papers to learn why she's so upset about the decision. The woman who has protected the royal family for years has questions. Is Prince Eddy involved in the Whitechapel murders?

Those papers, and Lady Wellie's health, send Veronica and Stoker on a search for answers. Stoker's brother, Tiberius, dresses them for the Wednesday night masquerade at the brothel. It's an unusual night in which Veronica is recognized by a stranger, stumbles across a filthy gatekeeper, and the couple try to recover the diamond star. But, when they find a body, they also find themselves caught in a dangerous trap.

Once again, Raybourn blends history and rumor, atmosphere and secrets into a remarkable novel. She's a gifted storyteller,  who creates one of the eeriest moments in literature when Veronica is momentarily alone in an alley. However Raybourn's true gift is in her creation of characters with their flaws and eccentricities and strengths. She can write of Scotland Yard, the royal family, Jack the Ripper, and combine all those elements into a compelling mystery. But, she can give us strong, independent characters such as Veronica Speedwell and Stoker. In every book, Raybourn manages to capture the nature of these two characters, with their passions for their professions, for justice, and for each other.   As Veronica says, she doesn't need Stoker to complete her. But, "In him I saw reflected all that I liked best in me. I saw honesty and pride, loyalty and a willingness to stand, however difficult, in service of one's principles."

Mystery, suspense, adventure, passion. It's all there in the best of Deanna Raybourn's writing. And, for those of us who have followed this series from the beginning, it's another book that ends with a sigh of satisfaction. "Excelsior!"

*****
FTC Full Disclosure - The publisher sent me a copy of the book, and I am eternally grateful.

I really have to get back to this series. Thanks for the reminder.

You're welcome, Gram! At least the last two in the series, this one and the previous one!