The Girl in White Gloves by Kerri Maher 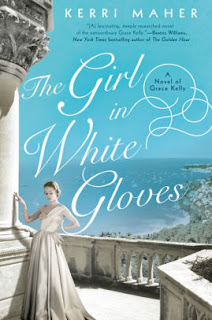 I can honestly say Kerri Maher's novel of Grace Kelly, The Girl in White Gloves, is one of the saddest
stories I've ever read. It's not that it's tragic. It's a tragedy that a woman who appeared to have everything never felt as if she was good enough. She spent her entire life trying to please men, from her father, to the older men she dated or loved, to Prince Ranier. I do know that Maher's book is a novel. And, she says it is not so close to "real events of real people's lives" that it's mistaken for a biography. Although it stars a real person, Maher admits she took liberties in writing the book. She created composite characters. She adjusted time lines to suit her dramatic needs. And, she didn't have many letters to or from Grace Kelly to use as a basis for the book.

So, what Maher chose to do was focus on Kelly's life as it pertained to the theater, to films, and then to Monaco. She chose to speculate about Grace Kelly's relationships with various men, including Ray Milland and Oleg Cassini. The book focuses on Kelly's emotions. She's an obedient, Catholic school girl, despite her affairs, always trying to please her father. And, that failure to please her parents, despite all of her success as an actress and then Princess of Monaco, is the shadow over the entire book. The Girl in White Gloves is actually about Grace Kelly's attempt to please men. Although the book talks about her close friends, she looked to her father, to the uncle she adored, a Pulitizer-prize winning playwright who advised her about the theater, to her teacher at the American Academy of Dramatic Arts, who she brings home to her parents' horror. The book talks about her affair with Ray Milland, her hope to marry Oleg Cassini.

The story is not told consecutively. Some chapters of her life as Princess of Monaco are interspersed with chapters about her career as an actress. I can remember only one section that seemed as if Grace Kelly was happy, the time she spent in Africa when filming Mogambo. Throughout most of the book, she was struggling with her own insecurities and her various relationships.

Perhaps it's the romantic in me. I have no idea whether Grace Kelly actually loved her husband or any of the men she's associated with in the book. That really didn't matter to me. What I find so sad is the portrayal of her as an unhappy woman who was always trying to please men, but one who never found her own happiness. That's just tragic.

I'm not sure what the intention was in Kerri Maher's novel The Girl in White Gloves. I hate to think of her as a woman who died too young at 52 without ever being happy in herself. As Maher said, the book suited her dramatic needs.

*****
FTC Full Disclosure - The publisher sent me a copy of the book, hoping I would review it.
Posted by Lesa at 3:00 AM

Thank you for this review Lesa. This is one of the 4 books I have waiting at my library for pickup. Your thoughts are similar to a few of the other book bloggers I follow. I think I will pass on this one.

You're welcome, Sharon. I'm glad I'm not the only one who said it, though.

I received a copy of this book through NetGalley. I have loved many of the historical fiction books that have popped up fairly recently based loosely on real people. I have tried to read this one a couple of times and it's just not holding my interest. I thought perhaps it was because I was never a fan of, or the least bit fascinated by, Grace Kelly. She just never seemed real to me. Now, I feel like I can safely put this one aside and move on. Terrific review, Lesa

Thank you, Kaye. Yes, you can move on. As much as you and I both loved our fathers, we didn't spend our entire lives trying to please them. Maybe she did. If she really did, that makes this book even sadder.