The Duke and I by Julia Quinn 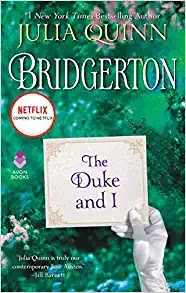 I actually had no intention of reviewing Julia Quinn's historical romance, The Duke and I. However, there are several reasons to discuss this one. It's an older book that originally came out in 2000, although this edition has the added 2nd epilogue. So, I was pleasantly surprised that the featured duke deals with a stuttering disorder that is an essential element of the plot. It's the first in the Bridgerton series. And, that eight volume series will appear on Netflix in 2020 as the Bridgerton series, under Shonda Rimes production company. Rimes is responsible for Grey's Anatomy, Scandal, and How to Get Away with Murder. Julie Andrews will voice the unseen role of Lady Whistledown, whose scandal sheets are fun and important in the books. The Netflix connection is important enough that I thought I'd mention The Duke and I.

Simon Basset didn't return to England until his father died, and Basset became Duke of Hastings. Although the older duke had wanted an heir, when his son didn't speak until he was four, and then he stuttered, the duke rejected Simon. As much as the young man struggled and wrote letters to his father, and tried to speak properly, the few times they met the meetings were so stressful that both left, one in anger, the other feeling rejected. By the time Simon returned, his best friend from school, Viscount Anthony Bridgerton, warned him he would be a catch for every husband-hunting debutante and their mother. Anthony knows, as the oldest of eight in the family, and a man with four sisters.

One of those sisters, Daphne, has been out for two years to the despair of her mother. Oh, the men like her, but as a sister or friend. They don't see Daphne as a romantic interest or prospect for marriage. After they both had some dreadful moments at a ball, Daphne and Simon hatch a plot. They're going to pretend to form an attachment. So, Simon will be safe from designing mothers because he has no intention of marrying. And, Daphne will attract other suitors. If a duke is interested in her, maybe they should be, too.

It's easy to see a problem coming along. Daphne starts to fall in love with Simon. Although he never wants to marry, Simon finds that he's jealous when other men court Daphne. Oh, there are going to be problems.

The characters are absolutely delightful in the first in the series. With such a charming family, it's easy to see why the series was picked up by Netflix. But, I'd rather read the books. It's fun to see the protective older brothers. Violet, the Bridgerton mother, is a force to be reckoned with. She's smarter and funnier than her children give her credit for. The chapter notes from the scandal sheet, "Lady Whistledown's Society Papers", give forewarnings of what's going to happen. Those are witty and clever, and everyone in the ton, in society, eagerly awaits the gossip. And, of course, there's Simon Basset. The messages in this book about children who stutter and how they suffer are powerful messages. With this edition, and the inclusion of the 2nd epilogues telling about the characters twenty years later, that message is enforced, with notes about love and patience.

I'll be returning to the Bridgertons world. It's timely to review Julia Quinn's The Duke and I.

I loved this series and Smythe-Smith Quartet and
Rokesbys as well!

I'm just starting to read it, Gram. That was my first one by her, but it won't be the last.

Per you recommendation, which never fails, I just downloaded this book this morning and am thoroughly enjoying it.

I love the lively humor in these books. They're not always historically accurate, but who cares when the books are so much fun?

Susan, That's a big burden to put on one person. But, thank you!

Even with historical mysteries, I've never been one of those picky people, Dean, as long as I enjoyed the book. And, I'm really looking forward to this series in between mystery book reviews.

New series for me, another for the TBR. And I think I would also enjoy this better to read than watch. Sometimes film versions of stories in this period focus so much on beauty and lush surroundings the nuances of the characters get overlooked. Thanks for the review.

I've only read the one book, Grandma Cootie, but, I believe what Dean James says. I'm looking forward to the humor in the books, and I'm not sure that always comes across the same way on TV.