One Good Earl Deserves a Lover by Sarah MacLean 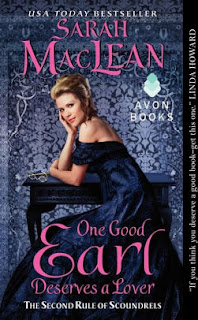 Do you know what I love about Sarah MacLean's historical romances (well, other than everything)? One Good Earl Deserves a Lover: The Second Rule of Scoundrels, the second in her Rules of Scoundrels series, is the funniest one I've read yet.
Each one is so different. The characters are all unique, with unique problems and backstories.

Cross is one of the partners in The Fallen Angel gaming hell in London. When Lady Philippa Maybury shows up in his office, he's intrigued by her intelligence. He's convinced she's mad, though. Why else would his partner Bourne's sister-in-law, be standing in his office, unchaperoned, asking him to ruin her two weeks before her wedding? Pippa says she's heard in the ladies' salons that he's a proper rake, "most proficient in coitus", and she requires a research assistant. It seems Pippa read the Book of Common Prayer in preparation for her wedding, and she has to research "carnal lust and appetites". She's even happy to pay him, laying out her proposal in detail.

Poor Cross. While she sees "a very tall, clearly intelligent, obviously fascinating man", he feels as if the beautiful blond with intriguing fingers is stalking him across his own office. She wants answers. Unfortunately, when he turns her down, she wanders through the building and answers the door when someone pounds on it. Digger Knight, the owner of a rival gaming hell is there to blackmail Cross, but Cross first has to rescue an innocent Pippa from his clutches. No wonder Cross is often clutching at his hair when Pippa is present.

After a family tragedy, Cross has worked diligently to overcome his past, while retaining a reputation for wickedness. But, Digger Knight knows his family secrets and his background. And, Cross is unwilling to reveal that past to Pippa even though she doesn't believe in lying. When she returns with her ongoing demand for knowledge, he's reluctantly drawn into the role of "research associate", after making her roll dice, while telling her the Second Rule of Scoundrels, "Only wager if you can win." And, the time comes when Pippa Maybury takes winning into her own hands.

MacLean dedicates this book "For girls who wear glasses." And, there are comments throughout the book that she needs them in order to see. But, Cross sees her as "his brilliant, bespectacled bluestocking". She is brilliant. There are comments about her scientific interests, her quest for knowledge. Pippa is a fascinating woman, with so much book knowledge, and, at times, so innocent and trusting when it comes to life.

While Sarah MacLean's men are handsome with interesting backgrounds, it's her women who stand out. In this book, Pippa talks about the power men have and how poorly they use it. She knows how she would have sought education, if she'd had that kind of power. But, there's one scene in which the brilliant Pippa turns the gaming hell world on its head, and uses her knowledge for power. Pippa is everything you could want in a complicated heroine.

While I'm looking forward to the next book in this series, I'll be buying One Good Earl Deserves a Lover. Pippa makes me laugh with joy and astonishment.

It sounds as if I am going to read the whole series. Thanks!

You're welcome, Gram. I hooked my sister on all of Sarah MacLean's books.

Lesa, you keep intriguing me with your reviews. I liked the premise of this book so much that I went on line and bought all four books in the series. The last one was published in 2014. You are an amazing reviewer.

Oh, Netteanne. Thank you. No one can say, though, that I didn't tell them there was sex in the books. But, I loved this whole series. I hope you have fun with it!