Murder in an Irish Cottage by Carlene O'Connor 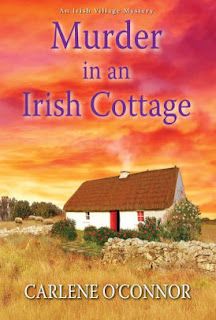 If I hadn't read Carlene O'Connor's short story, "Christmas Cocoa Murder", I might have felt a little overwhelmed diving into the fifth book in her Irish Village Mystery series. That's really because Siobhan O'Sullivan is one of six siblings who run Naomi's Bistro, and it's not easy to keep the O'Sullivans straight. Although Garda O'Sullivan is supposed to be on a summer break, when her garda fiancé needs support, Siobhan is there in Murder in an Irish Cottage.

Siobhan planned to spend the ten days with her siblings and Macdara Flannery, but Macdara receives a frantic call from his cousin, Jane. She doesn't tell him she found her mother, Ellen, dead in their cottage. Because Jane is blind, Siobhan and Macdara aren't sure if she noticed the foam at Ellen's mother, an indication she died of poisoning. And, Jane doesn't really give them proof she was out of a town at a conference. Between Jane's secrets and the villagers' superstitions and stories, there are all kind of suppositions going around.

The villagers claim they knew there would be a death in the cottage because there had been previous ones. They told Ellen and Jane it stood in a fairy path, and they wanted to bulldoze the cottage. But, the women wouldn't listen. They tell stories of fairy rings, dancing lights and unearthly screams the night before Ellen was found. But, it wasn't fairies who poisoned Ellen, and dressed her in a red dress to lay her on her bed.

It's a tangled web to Siobhan and Macdara, and it isn't even their murder investigation. But, Siobhan went to the academy with one of the garda who is investigating, and she doesn't mind asking questions. She's also going to worry at the problem until the answers become clear. There's a killer on the loose, and Siobhan suspects one of the villagers.

Murder in an Irish Cottage is an atmospheric story, filled with descriptions of the countryside. The superstitions and stories just add to the atmosphere. I would have liked a little more character development of the O'Sullivans, but it's quite possible that occurred in earlier books. I haven't read them, so I"m just catching up. However, now that I've discovered Carlene O'Connor's Garda Siobhan O'Sullivan and the Irish Village Mysteries, I'll continue to uncover the secrets of this patch of Ireland.

I like this series. I've been a fan of her books for a few years. She also writes under the name Mary Carter.

I think I have one or two under Mary Carter as well, Bonnie.