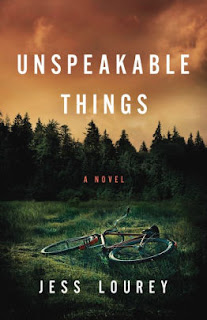 I'm not a fan of unreliable narrator novels. I am a big fan of coming-of-age stories. Those stories often are heart-breakers, as is Jess Lourey's Unspeakable Things. But, I like the voices. Young people see the world, and their situations, with different eyes than adults do. That's where the heartbreak comes in. And, when you read the Author's Note in Lourey's novel, and learn that she was inspired by true incidents from her own childhood, the story becomes even more powerful.

Cassie McDowell is twelve, almost thirteen, growing up in a small Minnesota community. She's become aware that her family life is different from her friends'. She lives on acres of land with her parents and older sister, Sephie. She and her sister have chores, gathering eggs, helping their mother with the garden, while their father is an unemployed artist. There are moments of fun with their father, but Cassie fears his rages, and fears him even more when he's drunk. She's afraid to sleep in her bed, choosing to sleep under it, or in the closet, hiding from his footsteps, although her father never comes too far up the stairs. And, she's grown to fear the parties her parents hold, parties with nudity, drugs, and sex. But, the scariest presence in her life may be the basement where she's forbidden to go.

Despite their lifestyle, there are moments of hope. Cassie's mother is a high school English teacher, and the girls are proud of her. And, Cassie has a crush on the handsomest boy in school, a boy who is kind to her, and even sat with her on the bus once.

But, the atmosphere in that small Minnesota town turns chilling just before school gets out for the summer. A middle-school boy is abducted, and returned. But, he's different when he's back, and Cassie knows he's been hurt, and he's turned wild. And, then another boy is abducted. The town puts a curfew in place for everyone under eighteen. A siren goes off, and kids have to be home by 9 PM. Cassie is aware of the troubles, "The Peeping Tom, Dad's parties, Chester the Molester, the curfew siren - it was gross, but it was our gross." And, then another boy disappears, and doesn't come back.

Lourey's book is beautifully written, with some sentences that are foreboding, and some that are just sad. Before the disappearance, she says, "And we stood there, in that safe pocket of smiles and laughter and summer dreams and yearbook autographs, and it was the last time we'd all three be together again, alive I mean." Or the comment made by one girl Cassie's age when she says "Kids are being taken." She replies, "I'm not going to let them steal my childhood, though."

Stolen childhoods. So many narrators like Cassie have stolen childhoods in coming-of-age stories. They're forced to grow up suddenly as a result of adult actions or tragedies. In Cassie's case, she fears so many people in her life, but she's curious, and wants to know who is responsible for the abductions. Despite her suspicion that it's someone she knows, she's desperate for answers.

Can you handle stolen childhoods, broken dreams, loss? You might be ready for Jess Lourey's Unspeakable Things.

I've got this one and plan to read it this year. Your review really drew me in and so I'll try it before long. A different sort of book for this author, right?

Oh, definitely, a different sort of book. This one has a great deal of connections to Jess Lourey's childhood.

Excellent review. You made me want to find out what happens.

I got this one for free as part of Amazon monthly reads. It sounds intriguing.

Thank you, Jeff. And Jess Lourey tweeted that I nailed what she wanted to do with the book. So, I'm very happy with the review. (Are you leaving for Florida today? Safe travels!)

Oh, it is, Margie. And, that Author's Note! Unbelievable.

We are halfway there, in North Carolina. We'll be there on Tuesday.

I read her Salem's Cipher books, but this sounds a bit too dark for me. I will have to think about it.

Gram, It was very moving, especially knowing so much was based on Jess Lourey's childhood experiences. That's sad, though. This one might not be for you.

If you are intending on getting into gardening, be sure to purchase the right tools and equipment necessary to do all the tasks. satta king