Trouble in Mind by Michael Wiley 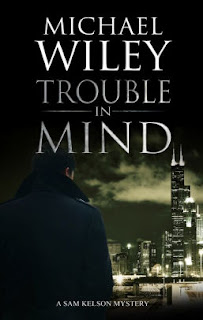 It's been a few years since Michael Wiley set a mystery in Chicago. Now, he introduces an unusual character, an ex-cop turned PI, and puts him in Chicago in Trouble in Mind. Sam Kelson's latest case is violent and gets him in all kinds of trouble with the police. But, it's Sam himself who often is the cause of that trouble, and, despite his problems, he's often the mood-elevator in this gritty story.

Kelson was an undercover cop for years until a drug operation went wrong. The young dealer was killed, and Kelson was shot in the head. To this day, Sam doesn't know who shot first, and that isn't usually his main problem. Kelson now has a brain injury. He copes with disinhibition. He always tells (or blurts out) the truth, and he always says exactly what he's thinking. It tends to get him in trouble quite frequently, often with women. He's now divorced, and he's a private investigator.

Despite Kelson's comments, Trina Felbanks hires Sam to investigate her pharmacist brother, who might be dealing drugs. But, Kelson finds Felbanks dead, just before the police raid the apartment and arrest Kelson for killing him. All of Sam's rambling stories about a good-looking redhead who hired him, and his discovery of the body, only gets him in deeper with the police. When Kelson finds another body, he knows someone is setting him up. And, somehow, his client, Trina Felbanks, who isn't Trina Felbanks, is right in the middle of the trap.

How far down can Sam go before he rescues himself, or finds someone to help him? When even his friends on the police force are exasperated, Sam turns to a man who quit the police academy. DeMarcus Rodman could have been an excellent cop. Now, he polices his own little corner of Chicago. And, he finds Sam to be needy, frustrating, and funny, so he forms a small group to watch Kelson's back. With Kelson's rambling stories of redheads, kittens, and police, someone needs to watch him.

Michael Wiley introduces an unusual cast of characters in his first Sam Kelson mystery. Kelson, with his disinhibition, is a fascinating person, but Rodman, the redhead, and the master manipulator are equally interesting. Despite the trauma to his brain, Kelson hasn't forgotten his instincts to protect the people he loves, his daughter and his ex-wife. Those instincts, and a little help from some friends, will help him a great deal in this gritty first book in the series.

If any of you remember L.L. Bartlett's Jeff Resnick mysteries, featuring another man with trauma to the brain, you might want to try this series. And, anyone who appreciates unique private investigators will want to try Trouble in Mind.

I liked the LL Bartlett Jeff Resnick series - have not thought of them in ages. I have read a couple of books by Michael Wiley and this one sounds very interesting. It is not currently not available in our system.

Hope you had a wonderful holiday season. And that you spoiled the kitties.

Oh, Netteanne, My kitties are always spoiled, especially when I'm home for holidays or weekends. There are toys spread from one end of the living room all down the hall. It's nice to see 10 and 12 year old cats tossing them around. Thank you.

The Michael Wiley is new, so your library system may still get it.

Never have read Resnick and I don't think I have ever read Wiley either. Went looking for this one and no joy at the local library system.

It's brand new, Kevin, so maybe your library system will get it. Severn House does most of their business with libraries.

satta kingThis will help insure that you do not end up ruining your garden by using improper tools and wasting a lot of time and energy for naught.