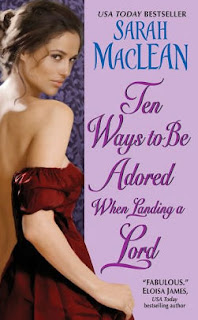 While reviewing the second book in Sarah MacLean's Love By Numbers series, Ten Ways to Be Adored When Landing a Lord, I'm also finishing the third in the trilogy. I love the overlap of characters, and the changes in relationships and characters in the course of the series. And, each book presents moments of humor.

When the women's magazine Pearls and Pelisses contains an article with "Lessons in Landing a Lord", Lord Nicholas St. John isn't happy that he's first on their list of "eminently laudable lords". He finds himself having to hide from women who are hunting him down all over London. So, when the Duke of Leighton asks him to hunt for his missing seventeen-year-old sister, Nick eagerly accepts the opportunity to escape north, along with Rock, his companion on so many adventures and hunting trips in the Mideast and Orient. But, they've never seen what they discover at Townsend Park in Yorkshire.

Lady Isabel Townsend has been holding everything together by a shoestring while her father, known as the Wastreal, hasn't been seen on his estate in years. Instead, he spends his time in London, gambling away his money, his property, and sometimes, even his daughter. Lady Isabel has faced down seven suitors who have shown up to claim her, saying they won her in wagers. Her butler, footman, and stable master all back her with weapons, but no one knows they are actually women. Lady Isabel is actually running the house, Minerva House, as a refuge for women fleeing abusive marriages or relationships. And, Georgiana, sister of the Duke of Leighton, fled to Minerva House after she learned she was pregnant.

Lady Isabel is also holding it all together for her ten-year-old brother, who is suddenly the Earl of Reddick when her father dies. That's when she realizes she'll have to sell her personal collection of marbles, statues, in order to keep the estate and Minerva House going. She writes for help, and is surprised when Lord Nicholas St. John, an antiquarian and expert in evaluating marbles, shows up so quickly. He and Rock don't tell Lady Isabel why they're in Yorkshire. And, both men find themselves "landed", falling in love with women on the estate. But, how does Nick tell Isabel that he was really there to hunt down Georgiana?

Characters. Sarah MacLean writes about some of the most interesting characters I've come across lately. Nick, twin brother of Gabriel St. John, the rake from book one, is totally different from his brother. He's the kinder, gentler of the two, and it's obvious with his treatment of all the women at Minerva House. Isabel is a protector, who shoulders all of the responsibilities of the estate and the house, learning to fix the roof, dealing with bills, handling it all. And, she's reluctant to share any of her burden with anyone, even Nick.

There's humor in the book, as Gabriel and Rock pick on Nick for his fame with the women. Even Isabel is teased by her women at the house, women who have read Pearls and Pelisses, and hope she can land a lord. There's steamy sex, and there's growing love between several pairs of characters.

As I said, I'm currently reading the third in the trilogy, featuring Nick's half-sister. But, Nick and Isabel have roles in that book, as does Gabriel St. John. MacLean's characters, their loves, and their changing lives, are fascinating. Ten Ways to Be Adored When Landing a Lord may have a stereotypical title, but there's nothing stereotypical about Sarah MacLean's historical romances.

Sounds great! I'll definitely be checking it out of the library.

Jackie is waiting for the first one, but the review definitely interested her.

Susan, There has been one of hers that definitely wasn't for me - featuring a fighter, but I've loved all of her other books.

Thanks for your review. I'm usually in every once in awhile for a good light story about Lords and Ladies, but this is a new author and series to me and sounds like so much more. Definitely captured my interest and adding it to my TBR.

You've peaked my interest. I bought the first in the triology on audiobook. Pieces soound like the Bromance Book Club, which I loved. So, I'll let you know!

Grandma Cootie, I hooked my sister on these books. I'll be interested to see if you like them.

Do let me know, Sandie. I like the humor, but it isn't as laugh aloud as The Bromance Book Club. One of the books is, but I haven't reviewed that one yet. It's one of the funniest I've ever read. Let me know what you think!