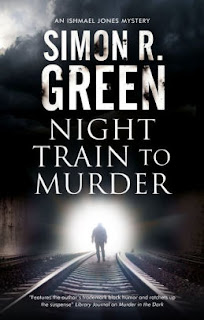 I'm a fan of Simon R. Green's paranormal mysteries featuring Ishmael Jones, the alien who crashed to
earth in 1963, and has been hiding and working as a human ever since. Even I have to admit, though, that Ishmael missed the obvious answer to this locked room mystery. Really, it took him almost the entire fifty-six minutes he had to solve the case in Night Train to Murder.

In order to hide in plain sight, Jones has been working for years for mysterious groups in England, protecting people from all the monsters that walk among us. The Organization assigns him and his chosen partner, Penny Belcourt, the task of protecting a VIP, Sir Dennis Gregson, the new Head of the British Psychic Weapons Division, when they receive intelligence there will be an attempt on his life. They're to keep him alive on the one hour express train from Paddington Station to Bath.

Even Ishmael and Penny know they're better at solving murder cases than keeping clients alive, and once again they fail to achieve their goal. Sir Dennis Gregson is found dead in a locked toilet. Now, the two must question the man's bodyguard and the only three people in the compartment with them, although neither Ishmael nor Penny saw any of the passengers pass them after Gregson left his seat. And, they have fifty-six minutes to find the truth before the train reaches Bath.

As I said, it's obvious who the killer is. It really comes down to just two people, but it doesn't take long for the reader to guess the correct one. So, why read Night Train to Murder? I appreciate the wit and black humor in Green's writing. He's the author of more than fifty science fiction, fantasy and paranormal mystery novels, and all of them that I've read have his trademark humor. I love dry comments such as "Sir Dennis had been a real pain in the arse while he was alive, and being murdered hadn't changed that one bit." Maybe not the wittiest comment in this book, but I tend to enjoy the remarks rather than write them all down.

Don't read Night Train to Murder for the mystery itself. Instead, enjoy the way Green delves into the characters, Jones and the suspects, defining each of them. And, of course, enjoy the dialogue and wordplay. I hope you're not disappointed. I never am with those aspects of Green's writing.

Have you read any of his other series? Hawk and Fisher sounds like a good one too. I put #1 The Dark Side of the Road on my library list. Thanks for this author.

I've read most of the Nightside series, Gram, which is gruesome.That's about as "horror" as I get. But, I think I'd like his Secret Histories series. Just so many books! You're welcome.