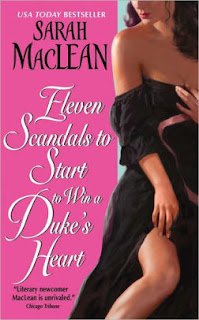 Eleven Scandals to Start to Win a Duke's Heart rounds out Sarah MacLean's Love By Numbers historical romance series. She finishes off the story of the St. John family with Juliana's story. Again, MacLean focuses on a woman who is unexpected in historical romances. Juliana refers to herself as a scandal.

Juliana Fiori is the half-sister of Gabriel St. John, Marques of Ralston and Nicholas St. John. Neither of the men realized they had a sister. Their mother left them when they were ten. She moved to Italy, and married a merchant. Their mother also left Juliana when she was a child. It was only when her father died, leaving Juliana's brothers as her guardians, that any of them realized they had siblings. Although, she's grown to love her brothers in the short time she's known them, she knows she's not at all acceptable to the ton.

Juliana is the Italian Catholic daughter of a fallen marchioness who continues to stir up scandal when she reappears in the midst of a dinner party intended to introduce Juliana to eligible bachelors. However, Juliana has eyes for one she can't have, Simon Pearson, Duke of Leighton. If there's anyone who represents the ton, with all its proper British rules and traditions, it's Leighton. And, he flirted with Juliana several times until he realized who she was. But, he can't have a breath of scandal touch the family now that his pregnant teenage sister is hidden away at Minerva House in Yorkshire.

But, Juliana won't go down without a fight. She challenges Leighton, saying she can prove how important passion is in life, if only he'll give her two weeks. She just doesn't know the short timespan he has. By the time his sister's situation becomes public, he wants to be at least betrothed, if not married, to a proper British bride with an impeccable background. He can't continue to yearn for a woman who is "too bold, too brash". She's the opposite of good English girls. She says whatever is on her mind, with no consideration of what people might think. And, the Duke of Leighton was raised to think of nothing but honor and duty.

MacLean continues to turn expectations upside down as her characters find love, instead of meeting society's expectations. Eleven Scandals to Start to Win a Duke's Heart is a fun, romantic culmination to the Love By Numbers series. The St. Johns are a growing family, coming together to protect their own while defying the ton with love matches and romance.