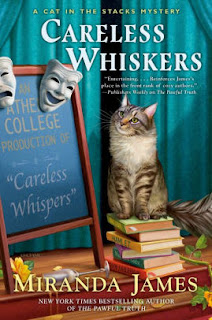 Miranda James marks the twelfth book in the Cat in the Stacks series, Careless Whiskers, by bringing in all the beloved characters, including the Ducote sisters, while staging an entire play. A librarian, cats, theater, some humor, and a murder. What more could a cozy mystery reader want?

When Laura Harris, librarian Charlie Harris' daughter, throws a tantrum, she scares Diesel, his Maine Coon cat. Charlie realizes she has a reason to be upset. The star who was to be her leading man in Athena College's spring production of Careless Whispers, had to pull out for medical reasons. Now, she has to appear with a man she detests, Luke Lombardi. He might be a Tony-nominated actor, but he's not a good person. Charlie assures her that her husband, Frank, who is the director, will be able to handle Lombardi.

Once he sees Lombardi and his entourage at the welcome reception, Charlie is afraid only the Ducote sisters have the clout to handle the arrogant actor. And, as he attends each rehearsal, Charlie watches Laura and Lombardi spar. Then, someone starts to pull pranks on the actor. Charlie knows Laura wouldn't try to ruin the play, but someone wants to put Lombardi off his game. And, Laura could top the list of suspects when Lombardi dies on stage.

Although Charlie promised his children and Chief Deputy Kanesha Berry that he wouldn't stick his nose in, he worries about Laura, and his curiosity gets the better of him. In fact, that curiosity leads to one of the funniest scenes I've read in any of these books as Charlie tries to hide from the police.

Careless Whiskers, despite the murder and a few obnoxious characters, is the kind of mystery story that stands for cozy. There's all kinds of talk about food. There are playful cats and a dog. Charlie's family and family love has grown in the course of the series. And, Charlie himself has a woman he loves. As I said, what more could a cozy mystery reader want?

Totally enjoy this series. The characters are like an old shoe, very comfortable and enjoyable. And I would love to have a cat like Diesel that would walk on a leash. Tried it with one of mine and it was an abject failure.

Netteanne, One of mine, Josh, absolutely loved it. If he saw me open the door where his harness was, he'd run into the living room, throw himself on his back, and wait to get his harness on. We had to stop, though, when he started running to the door, thinking he was going to go outside all the time.

But, you're right. This is a comfortable series.

You're right. When I think cozy, I think about this series. Each book is so enjoyable.

This one is one of my favorites, Grandma Cootie, but we all know how much I love theater.