A Sister's Courage by Molly Green 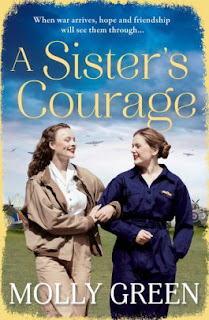 While I enjoyed the premise of A Sister's Courage, the first in Molly Green's Victory Sisters series, I
had to continually remind myself how young Raine Linfoot was. The heroine of the book may have been a pilot during World War II, shuttling planes between airfields, but she was only seventeen when she joined the Air Transport Auxiliary. By the end of the book, she was only twenty. There are reasons I found her rude and abrupt, sometimes quite selfish, not the easiest person to like.

Lorraine (Raine) Linfoot wanted to be a pilot from the time she was young, and her father first let her take a ride in a plane. Even then, she and her father kept the flight a secret from her French mother, who would have objected. Raine learned to keep a lot of secrets from her mother, including her job when she was seventeen, and her flying lessons. By the time the war was on, and the women in the AirTransport Auxiliary were hired to ferry aircraft to airfields, she could no longer hide her passion from her mother. That didn't prevent her mother from trying to coerce her oldest daughter to return home.

But, Raine enjoyed her experiences flying various planes, and working with other female pilots. She didn't enjoy living with the fear of loss. The pilot who trained her went missing, presumed dead. Another pilot, Alec Marshall, was interested in her, but she worried about him. Was he safe? Would he, too, go missing or end up dead? Would she crash a plane herself? Even when she has the opportunity to go on leave, she sees bombed out buildings, and sees death and destruction. She can't escape it in 1939 England.

As I said, I loved the history and premise of this story. Green's author's note at the beginning of the book says there were 168 female pilots including 4 female engineers who joined the Air Transport Auxiliary, risking their lives every day to ferry planes to where they were needed. And, she uses Pauline Gower, an actual woman, as an essential character in the book. According to the author, Gower was a qualified pilot who fought for the rights of female pilots to be allowed to join the ATA, and she was appointed Senior Commander of the women's section. By 1943, she also obtained equal pay for the women pilots, unfortunately only for the war years.

Raine's experiences as a pilot before and during the war years was fascinating. But, it took time for her to mature, to become less rude and inconsiderate. Perhaps she was that way because of her lifelong conflict with her mother. As the oldest of three daughters, Raine fought her mother for her desired role and career. But, I found it difficult to like her, or her unwillingness to speak the truth to a man who wanted to be first a friend, and then wanted more.

Despite my feelings about Raine, I'm still interested in the novel about the second sister. The next one is scheduled for May 2020. It's fascinating to read about the British women on the homefront during World War II.

*****
Here's the publisher's information about A Sister's Courage. http://bit.ly/2GwC5Ux

*****
Molly Green is a seasoned author of fiction and non-fiction. She has sold lipstick in a Denver store, modelled in Atlanta, assisted the UN Narcotics Director in Geneva, chauffeured a Swiss Gnome in Zurich, assisted a famous film producer in the UK, and cooked in a sanatorium in Germany. She now lives and writes in Tunbridge Wells, Kent.

*****
FTC Full Disclosure - I received the book to participate in the TLC Book Tour.

Thank you for being on this tour! Sara @ TLC Book Tours