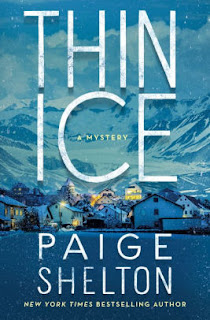 Even if you're a cozy mystery who loves Paige Shelton's books, you might want to give Thin Ice a try. It's a thriller for all of us who don't want to be terrorized. While the ordeal is over, the terror and past still lingers for Beth Rivers. I loved the character's courage, the other characters in the book, and the remote setting. And, those of you who never pick up a cozy mystery might want to try this book.

Elizabeth Fairchild was kidnapped by a crazed fan and held captive for three days before she managed to escape. She's still traumatized by the ordeal she doesn't remember after she threw herself from a moving van and had to have brain surgery. She only remembers the man's name. She takes back her birth name of Beth Rivers, and heads to the most remote village she can find, Benedict, Alaska.

Beth has no real plans other than to hide in Benedict House until her kidnapper is found by the police or her obsessed mother. However, the residents of Benedict notice her because she's going to stay at the house. What she didn't know when she reserved a room is that the house is a shelter for female felons who are strictly supervised there. Everyone asks Beth what she did to end up there. Only the police chief, Gril, knows her secret. He's determined to protect her, but he also knows she needs something to occupy her time. Because there was a death just as Beth arrived, Gril recruits her to help him. As the granddaughter of a small town police chief, she has research and mathematical skills he can use. Although Beth worries that the death might be connected to her arrival, she's interested enough to dig in to the story behind it.

Shelton's first thriller/mystery works beautifully on so many levels. Beth's childhood is fascinating, and that story is slowly revealed. Her memory of her three-day ordeal does not come back as quickly as she would like, and there is still so much unknown by the end of the book. The residents of Benedict, Alaska are intriguing people. So many of them are runaways with secrets, people hiding from their own past. But, they come together as a community when it's important. Shelton manages to include humor, which alleviates the tension as Beth tries to recover her own memories. Even her attempts and her physical issues are engrossing. This is the story of a woman trying to build on her past while always looking over her shoulder.

I'm a fan of Paige Shelton's cozy mysteries. And, I regret the end of several of her series. But, I loved Thin Ice. I'm looking forward to the next book in a series with an unusual new character plunked down in a remote area of Alaska.

Lesa, I think this one will suit me better than some of the cozies (though I do read them occasionally). I'm looking forward to it. Cathy praised it today as well. Now if my library will just acquire it soon! LOL

I think you'll like this one, Kay. I'm going to have to check out Cathy's comments. Thanks for the note referring to her blog!

I have this on hold at the library

Our copies just came into the library, Sandy, so maybe your library will be getting it this week, too.

I have this on hold. I have enjoyed all of Paige Shelton's series, this one will be interesting as it sounds so different.

I think you're going to like this one, too, Netteanne.

Loved this! Can't wait for the next!